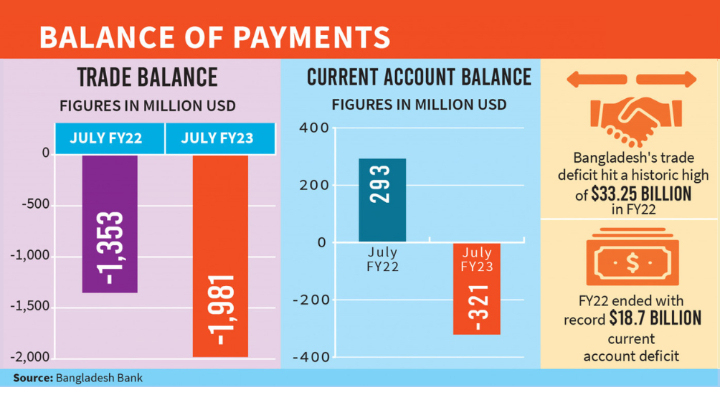 The trade deficit in July – the first month of the current fiscal year – stood at $1.98 billion, despite lower imports owing to various conditions imposed by the central bank to keep the country's foreign exchange reserves stable.

Sector insiders said the ballooning import costs – due to an increase in the prices of goods in the international market and the appreciation of dollars against taka in the outgoing fiscal year – have widened the trade deficit.

However, since the beginning of this fiscal year, the import payment is decreasing, while remittance inflows are increasing. If the trend continues, the reserves will become stable, they added.

According to the central bank's monthly balance of payments report, imports in July of fiscal 2022-23 stood at $5.86 billion, which is an increase from $4.75 billion in the same month of the previous year.

Inbound shipments started to slow down in July after the Bangladesh Bank had tightened import policies to save foreign exchange reserves amid rising dollar prices.

Import in terms of LC (Letter of Credit) settlement dropped 20% in August from the previous month.

LC payments stood at $5.93 billion in August, a drop from $7.42 billion in the previous month, according to the Bangladesh Bank report.

According to central bank officials, the regulator is discouraging imports of all types of goods except essential items amid depleting foreign currency reserves.

Ahsan H Mansur, executive director of the Policy Research Institute of Bangladesh, said that the trade deficit is narrowing mainly due to an increase in remittances and a decrease in imports.

The noted economist believes it is time to end the incentive on remittance and keep the rate of the dollars sent home by expatriate Bangladeshis at par with the market. It will lead to an increase in remittance inflows.

"At the same time, exports should be increased massively because our imports will also have to increase after a while otherwise there will be a shortfall in production," he added.

At the end of fiscal 2021-22, the trade deficit stood at $33.25 billion – the highest in the history of the country - and the deficit in the current account balance exceeded $18.5 billion.

According to the central bank data, exports increased by 33.45% and imports went up by 35.95% in the last fiscal year. The country earned $49.25 billion from exports and spent $82.50 billion on imports in 12 months through June this year.

In July this fiscal year, the current account deficit stood at $321 million, which is an increase from $293 million in the same month a year ago.

The current account faced a large deficit of $18.69 billion in the outgoing fiscal year, which is a staggering increase from just $4.57 billion in fiscal 2020-21.

With a cloud of uncertainty growing over the export due to recession fears in Europe and the USA, remittance prospects look promising as the money sent home by expatriates exceeded the $2 billion mark for the second month in a row.

Bangladesh received $2.03 billion in remittances from expatriate workers in August – up 12.6% from a year earlier – owing to pricier US dollar in the formal banking channel and several government incentives, the central bank said on Thursday.

In August 2021, remittances from Bangladeshis working abroad were $1.81 billion.

In July, the country received $2.09 billion from Bangladeshi expatriates, which was the highest in the last 14 months. July remittance inflow registered a 12.01% growth compared to the corresponding month last year.

Remittance inflows declined 15% in the 2021-22 fiscal year compared to the previous year, when expatriates had sent home the highest amount in the country's history amid the Covid-19 pandemic.

In FY22, expatriates sent $21.03 billion through official channels which was $24.77 billion in the previous fiscal year, according to Bangladesh Bank data.