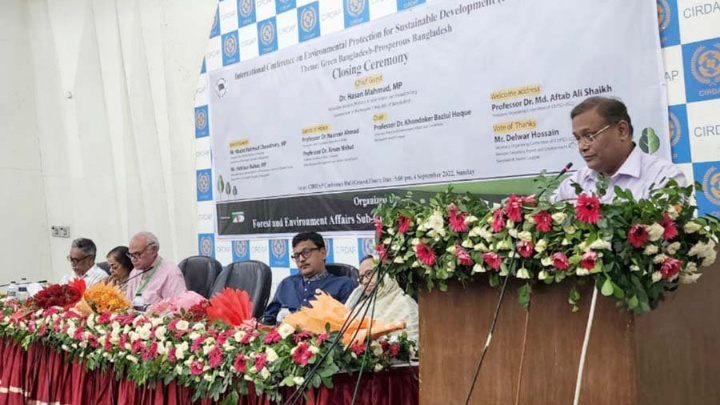 Information and Broadcasting Minister Dr Hasan Mahmud today said the sample of BNP's movement is to fight each other while staging agitation, throwing bricks and stones at police and trying to create chaos across the country.

"BNP has started dialogues with those parties which have no existence apparently, they have only signboards. And the BNP along with those parties has declared to carry out movement against the government. The BNP had also formed such an alliance before the 2018's election. And the result of that alliance is only five seats in the polls. The countrymen would not respond to their call like before," he said.

The minister told reporters while replying to a query at CIRDUP auditorium in the capital.

Hasan said none can drive out anyone from the field of election and the polls will be held under the Election Commission. The BNP fled from the field of 2014's election while they participated in the 2018's polls by riding in the stair of 'election train', he added.

He said it is their decision whether the party would take part in the next general elections or not. "But, we want that BNP to come to the polls and check their popularity," said Hasan, also Awami League joint general secretary.

Rejecting the BNP's demand of a caretaker government again, the minister said the election is held under the Election Commission and it is an independent commission. The government would discharge its duty as an election-period government and the polls will be held in line with the Constitution like all other democratic countries across the world including India, Japan, Australia, the United Kingdom and Continental Europe, he added.

Earlier, the information and broadcasting minister addressed the closing ceremony of the 'International Conference on Environmental Protection for Sustainable Development- ICEPSD-2022' in the auditorium.

In his speech, Hasan said it is needed to encourage the people to build 'Green Bangladesh'. Bangabandhu's daughter and incumbent Prime Minister Sheikh Hasina had started work to protect the environment in 1981 after returning home and started afrostation through planting trees by Krishak League in 1982, he added.

He said Bangladesh is now well-known across the globe for its leading role in protecting the environment and tackling the impacts of climate change under the dynamic leadership of Prime Minister Sheikh Hasina.

He said it is Prime Minister Sheikh Hasina who started the work of protecting the environment and afrostation at first in the country and first introduced the post of Environment Affairs Secretary as a political party. Incumbent Information and Broadcasting Minister Dr Hasan Mahmud was the first secretary of the post and he discharged his responsibility with utmost sincerity about a decade, he added.

Another special guest Deputy Minister for Environment, Forest and Climate Change Habibun Nahar said such regular seminars are creating awareness among the countrymen.