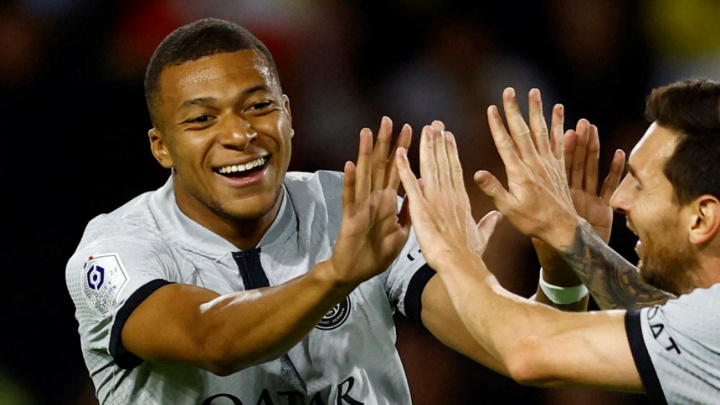 Kylian Mbappe scored a goal in each half as Paris Saint-Germain beat 10-man Nantes 3-0 on Saturday to reclaim top spot in the Ligue 1 table.

PSG had seen Marseille move above them at the top of the standings by beating Auxerre 2-0 earlier, but a comfortable win for Christophe Galtier's side at the Stade de la Beaujoire means they sit at the summit once more thanks to their far superior goal difference.

Mbappe opened the scoring in the 18th minute, curling a superb strike over goalkeeper Alban Lafont and into the net at the end of a breakaway after being set up by Lionel Messi.

Nantes had beaten PSG at home in this fixture last season but their hopes of taking anything from the reigning champions this time were seriously hampered when they had Brazilian full-back Fabio sent off midway through the first half.

The former Manchester United defender was shown a straight red card for a high challenge in midfield on Vitinha that forced the Portuguese player to come off hurt.

PSG scored again shortly after half-time as Messi set up Mbappe to finish at the near post, with the goal initially being disallowed for offside only to be awarded following a VAR check.

Rested at kick-off, Neymar came off the bench after that and played a part in the third goal in the 68th minute as his shot came back off the upright and Nuno Mendes followed up to finish.

PSG, who have scored 28 goals in seven competitive outings this season, start their latest bid for Champions League glory at home to Juventus on Tuesday.