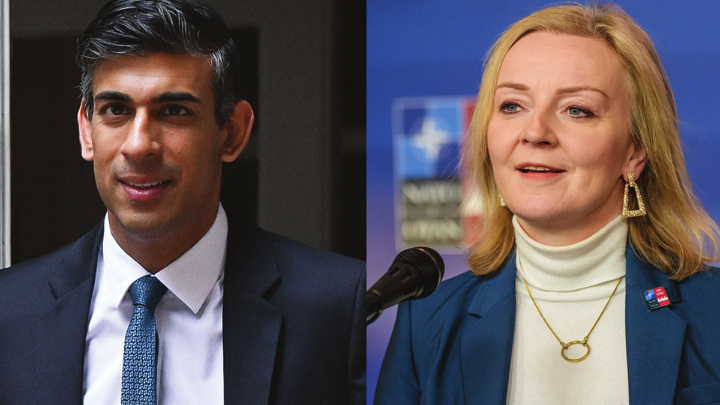 The two Conservatives battling to become Britain's next leader squared off Wednesday for the final time in front of party members set to decide the contest, just days before the victor takes power.

Foreign Secretary Liz Truss is heavily tipped to win the summer-long contest to replace outgoing Prime Minister Boris Johnson, after leading rival Rishi Sunak in polls of the Tory grass-roots for much of the race.

Postal and online voting by the estimated 200,000 party members, which began earlier in August, closes on Friday before the winner is announced on Monday.

The new leader then enters Downing Street the following day.

If selected, Truss said she would be "focusing on energy prices for consumers, how we get the British economy going," at the last of 12 hustings held nationwide since the contest kicked off last month.

The next prime minister takes charge at a daunting moment, with Britain facing its highest inflation in 40 years as energy bills soar, and amid warnings of an imminent recession.

Truss has vowed to cut taxes to spur growth, and is yet to detail how she would help Britons set to struggle with their surging bills this winter, with warnings of looming catastrophe for millions.

resign from government, forcing his departure.

However, some ministers and MPs - including Truss - remained loyal to the end, arguing Johnson deserved more time to turn around his controversy-tarred three-year tenure.

Whoever that is may struggle to reunite the Conservatives, with the splits worsened by the bitter leadership tussle.

Sunak struck a more conciliatory tone towards Truss at Wednesday's hustings, held in front of thousands of Tory members packed into London's Wembley Arena, but appeared to aim a dig at the scandal-tarred Johnson.

Britain must hold a general election by January 2025 at the latest, but a ballot could come sooner, with most people expecting it in 2024.

Recent polls of the wider electorate show the Conservatives face a growing challenge to retain power.

The main opposition Labour Party now boasts a double-digit lead over the ruling party amid a deteriorating economic landscape.