Traders apply to export Hilsa to India ahead of Durga Puja 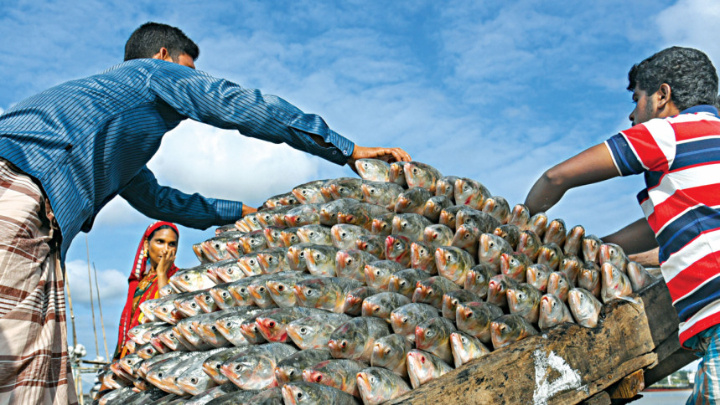 Traders in Bangladesh are seeking permission from the government to export Hilsa to India on the eve of the Durga Puja, the biggest religious festival of Hindu devotees, when the demand for the popular fish goes up.

Exporters have been selling the fish, well-known for its distinct flavour, in the neighbouring country for the last three years after securing approval from the commerce ministry.

This year too, they are seeking permission from the government to ship the fish ahead of the festival in October. So far, 25 exporters have submitted applications to the ministry.

Bangladesh has maintained a ban on the export of the national fish since August 2012 to keep its prices reasonable in the domestic market. But the government lifts the restriction for India on the occasion of the Durga Puja as a goodwill gesture.

Last year, the commerce ministry gave approval to 115 firms to export 4,600 tonnes of Hilsa to India against applications from around 200 companies. But only 1,100 tonnes were ultimately exported.

Some 1,450 tonnes were exported to India in 2020 and 18 firms received permission in the year. In 2019, only one trader got the permission and it exported 500 tonnes of the fish.

Most of the fish go to West Bengal. The Durga Puja is the biggest and most popular festival in the Indian state.

Since fishermen started fishing in the sea on July 23 after a 65-day ban, enough Hilsa is being netted currently. The trading of fish has increased noticeably at the fish landing centres in the coastal areas of the country, said industry people.

A number of traders say it was experienced in the last two or three years that those who got the permission to export Hilsa to India were not the actual exporters. And they failed to make the shipment on time despite receiving the approval.

Since a large number of exporters supply Hilsa to India during the period, buyers in the neighbouring country offer lower prices, causing the suppliers to incur losses, he said.

"The government should allow the genuine exporting firms to ship the fish and set the export period for at least one month. Otherwise, the goal will not be achieved."

The owners of a number of exporting firms alleged that the exporters could not send the shipment within the stipulated time last year due to the delay the ministry made in giving permission.

"When the approval was given, the market price of Hilsa was lower in India than in Bangladesh. As a result, Bangladeshi exporters failed to benefit from the export opportunity," said one exporter.

Traders say the Hilsa export is not an issue that is limited to trade only. Rather, it fosters harmony between the two neighbours.

"Hilsa can be exported in a planned way if the decision is made in advance instead of prompting the exporters to rush to it ahead of the Durga Puja. Otherwise, exporters will face losses and the government will be deprived of valuable foreign currencies."

In Bangladesh, local fishermen caught 5.65 lakh tonnes of Hilsa in the fiscal year of 2020-21, the highest on record. It was 5.5 lakh tonnes a year ago, data from the Department of Fishing showed.