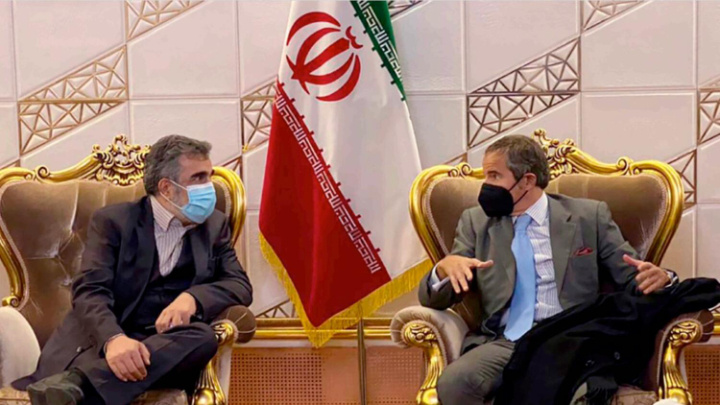 The Biden administration is expected to weigh in this week on Iran’s latest offer to resume its compliance with the 2015 Iran nuclear deal, but neither side is offering a definitive path to revive the agreement, which has been on life-support since former President Donald Trump withdrew from it in 2018.

US officials say they expect to respond to Iran’s comments on a European draft proposal by Wednesday, after which there is expected to be another exchange of technical details followed by a meeting of the joint commission that oversees the deal. The new developments, including stepped-up public messaging campaigns by both Tehran and Washington, suggest that an agreement could be near.

Despite the forward movement, numerous hurdles remain. And key sticking points could still unravel efforts to bring back the 2015 deal under which Iran received billions of dollars in sanctions relief in exchange for curbs on its nuclear program intended to prevent it from developing an atomic weapon.

Even US supporters of an agreement are no longer referring to the “longer and stronger” deal that they had initially set out to win when indirect negotiations with Iran began last spring. And, on the Iranian side, demands for greater US sanctions relief than the administration appears willing or able to promise could undercut the push to revive the agreement.

In Washington, the Biden administration faces considerable political opposition to returning to the 2015 deal from both Democrats and Republicans in Congress who remain unconvinced that it is in US national security interests.

“I intend to systematically fight the implementation of this catastrophic deal, and will work with my colleagues to ensure that it is blocked and eventually reversed in January 2025," said Republican Sen. Ted Cruz of Texas.

The recent indictment of an Iranian for plotting to murder Trump’s former national security adviser John Bolton and the attack by an apparent Iran sympathizer on the author Salman Rushdie have further contributed to doubts that Iran can be trusted.

The latest draft does not include Tehran’s demand that the U.S. lift the terrorism designation of Iran’s Revolutionary Guards Corps, and Iran has stepped back from a demand that the International Atomic Energy Agency close its investigation into unexplained traces of uranium at three undeclared sites, according to a senior administration official who requested anonymity to discuss ongoing efforts to resurrect the deal.

But, rescinding the terrorism designation imposed by Trump was never a realistic demand. Not only does it fall outside the scope of the nuclear deal, it was made virtually impossible since the Bolton plot indictment, ongoing Iranian threats to other former U.S. officials, and the Rushdie attack.

And, while Iran may have agreed to a mechanism to eventually return to the deal without the IAEA investigation being closed up front, it has said that its actual compliance with an agreement remains contingent on getting a clean bill of health from the agency.

The senior administration official said a “deal is closer than it was two weeks ago,” but cautioned that the outcome remains uncertain "as some gaps remain.”

And, Iranian officials on Tuesday bristled at the suggestion that they’ve stepped back from their demands to re-enter the deal.

Seyed Mohammad Marandi, an Iranian adviser to the indirect talks in Vienna, took to Twitter on Tuesday to assert that removing the IRGC from the State Department’s foreign terrorism list was never a precondition and insisted that “no deal will be implemented before the IAEA Board of Directors PERMANENTLY closes the false accusations file.”

Meanwhile, America's top ally in the Middle East, Israel, has become increasingly alarmed at the apparent movement toward a deal. Israel’s alternate prime minister Naftali Bennett on Tuesday called on the Biden administration to resist forging ahead with a deal with the Iranians.

“I call on President Biden and the American administration to refrain, even now at this last minute, from signing the agreement with Iran,” Bennett said in a statement.

He noted that Israel is not party to the 2015 agreement signed by the five permanent members of the United Nations Security — the U.S., the United Kingdom, Russia, France, and China as well as Germany — but that Israel would be directly affected and reserved all rights to its self-defense.

“One way or another, the State of Israel is not a party to the agreement," Bennett said. "Israel is not committed to any of the restrictions stemming from the agreement and will utilize all available tools to prevent the Iranian nuclear program from advancing.”

The White House insists that the terms under discussion include the key underpinnings of the 2015 deal. The US would lift hundreds of sanctions the Trump administration re-imposed when it withdrew from the deal in 2018. And Iran would roll back its nuclear program to the limits set by the original nuclear deal, including caps on enrichment, how much material it can stockpile and the operation of advanced centrifuges needed to enrich.

However, it remains unclear what exactly would happen to Iran's current stockpile of highly enriched uranium and what it would be required to do with the advanced centrifuges it has been spinning. The White House has said both would be “removed” but has not offered details.

As of the last public count, Iran has a stockpile of some 3,800 kilograms (8,370 pounds) of enriched uranium. Under the deal, Tehran could enrich uranium to 3.67% purity, while maintaining a stockpile of uranium of 300 kilograms (660 pounds) under constant scrutiny of surveillance cameras and international inspectors.

In terms of sanctions relief, Iran has been demanding that the administration pledge that a future president not be allowed to re-impose the lifted penalties as Trump did and promise that Congress will repeal statutory sanctions legislation passed initially to force Iran back to the negotiating table. The administration is in no position to guarantee either.

“Reports that we have accepted or are considering new concessions to Iran as part of reentering the 2015 nuclear deal are categorically false,” National Security Council spokeswoman Adrienne Watson said.
Hindustan Times