Kyiv Says Almost 9,000 Ukrainian Soldiers Have Been Killed In Its War With Russia 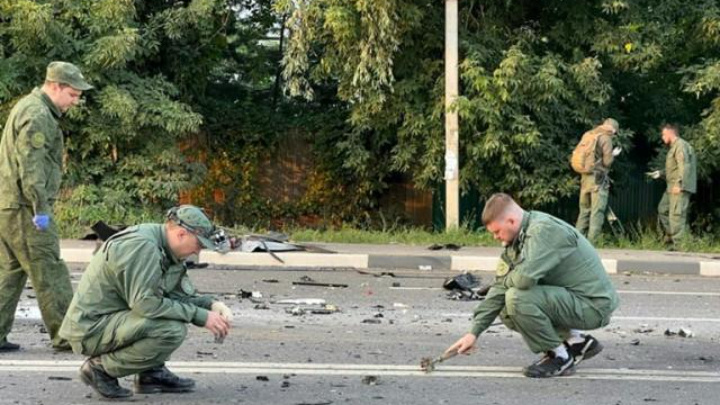 Nearly 9,000 Ukrainian soldiers have been killed since Russia invaded, the country's top military officer said Monday, as Moscow accused Kyiv over the assassination of the daughter of a leading hardliner.

General Valeriy Zaluzhny, Ukraine's commander-in-chief, said Ukraine's children needed particular attention "because their fathers have gone to the front and are maybe among the nearly 9,000 heroes who have been killed".

Zaluzhny's comments on the Ukrainian death toll, reported by Interfax-Ukraine news agency, were the first indication of Kyiv's military losses since April.

On Wednesday, Ukraine will mark its independence day -- and six months since Russian troops invaded.

After Ukrainian resistance thwarted an early Russian push on the capital Kyiv, Moscow's forces have focused on gaining ground in the country's east.

The shockwaves of the war are being felt around the world with soaring energy prices and food shortages.

A Ukraine presidential adviser told AFP that Russia is trying to coax Ukraine into fresh talks in order to buy time to regroup for a fresh offensive.

For weeks, the Kremlin has been "trying to convince Ukraine to enter into negotiations", Mykhaylo Podolyak told AFP.

He suggested this was a ploy to "freeze the conflict while preserving the status quo in the occupied Ukrainian territories."

Podolyak said Kyiv believes Moscow does not really want serious peace talks but "an operation pause for its army" ahead of a new offensive.

Russia's FSB security services earlier accused Ukraine of being behind a car bombing on Saturday in the outskirts of Moscow that killed Daria Dugina, the daughter of hard-line Russian ideologue Alexander Dugin.

"The crime was prepared and committed by Ukrainian special services," the FSB said in a statement carried by Russian news agencies.

Russian President Vladimir Putin denounced the "vile crime" in a message of
condolence to her family.

The FSB statement said the person responsible was a Ukrainian woman born in 1979 who had rented an apartment in the same building where Dugina lived.

After the car bombing, she had fled to EU member Estonia, it added.

Dugin, 60, is an outspoken Russian ultranationalist intellectual who enthusiastically backs Russia's invasion of Ukraine, as did his daughter. Russian media reports suggest Dugina had borrowed her father's car at the last minute.

Over the weekend, Podolyak denied any Kyiv link to the bombing.

In Spain, Borrell told reporters that EU defence ministers would next week discuss launching a major training operation for Ukrainian forces in nearby countries.

"It seems reasonable that a war that is lasting and looks set to last requires an effort not only in terms of supplies of material," Borrell said.

"I hope it will be approved," said Borrell.

All EU member states would have to agree to step up the training that several are already providing Ukraine under bilateral agreements.

EU defence ministers have a two-day meeting in Prague from next Monday.

With much of Europe preparing for fuel shortages as Moscow cuts back its deliveries to the west in response to sanctions, Bulgaria said Monday it was seeking talks with Russia gas giant Gazprom.

The country is almost totally dependent on Russia for natural gas supplies.

"We obviously have to turn to them," said Energy Minister Rosen Hristov.

Ukraine President Volodymyr Zelensky warned over the weekend that Russia might mark Ukraine's Independence Day by launching a trial of Ukrainian soldiers captured during the siege of Mariupol.

"This will be the line beyond which no negotiations are possible," he warned in Sunday's nightly address.

The capital Kyiv has already announced a ban on public gatherings around public holiday on Wednesday, and the city of Kharkiv, in the east, has declared a curfew.

Also on Monday, soldiers from Ukraine's Azov regiment captured by Russian forces after the battle for Mariupol said they were beaten in captivity.

The soldiers, released as part of a prisoner exchange, told reporters they saw soldiers that were beaten until their bones were broken.

One ex-prisoner said he had observed cases of "serious torture".
BSS