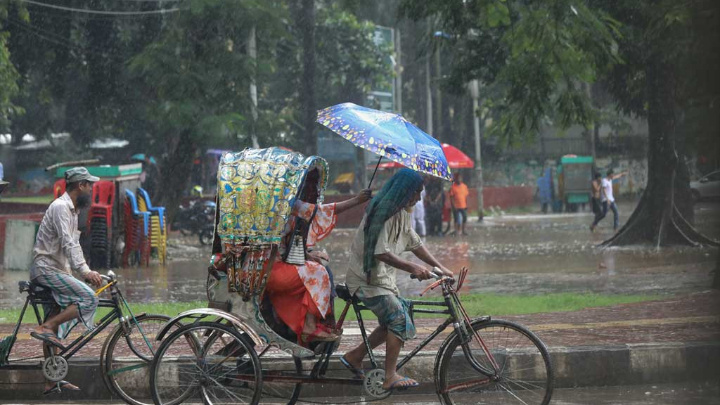 The weather department has predicted showers across Bangladesh in 24 hours commencing 9am on Monday.

“Light to moderate rain or thundershowers accompanied by temporary gusty wind is likely to occur at many places over Mymensingh, Chittagong and Sylhet divisions and at one or two places over Rajshahi, Rangpur, Dhaka, Khulna and Barisal divisions with moderately heavy to heavy falls at places over the country,” said a Met Office bulletin.

Day and night temperatures may remain nearly unchanged over the country, it said.

The weather office recorded the highest 16mm rainfall in Nikli of Mymensingh division in 24 hours till 6am on Monday.

Meanwhile, the land depression over Chhattisgarh and the adjoining area now lies over North Madhya Pradesh of India. It is likely to weaken gradually further.

The axis of monsoon troughs runs through Rajasthan, Uttar Pradesh, the centre of the Land Depression, Bihar, Gangetic West Bengal to Assam across the central part of Bangladesh. One of its associated troughs extends up to Northeast Bay, as per the bulletin.
Dhaka Tribne