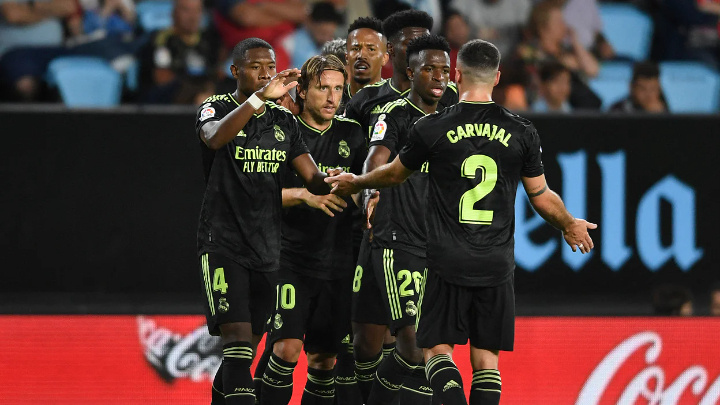 A stunning strike by Luka Modric helped Real Madrid on their way to a 4-1 victory at Celta Vigo on Saturday as the reigning Spanish champions made it two wins from two in La Liga this season.

Modric curled home from outside the box just before half-time to put Carlo Ancelotti's side back in front after Karim Benzema's early penalty had been cancelled out by Iago Aspas, who converted a spot-kick at the other end.

Vinicius Junior and Federico Valverde added further goals in the second half while Eden Hazard had a late penalty saved as Madrid built on their La Liga season-opening 2-1 win at Almeria and joined Real Betis and Osasuna on six points at the top of the fledgling standings.

"He is a fantastic leader for us. He scored the most important goal of the game because he put us back ahead and after that the game was a bit more simple for us," Ancelotti told Onda Cero radio of Modric, who received an ovation from the home crowd in Galicia.

"That is something very special, when fans of other teams acknowledge you and applaud you. It's lovely," the Croatian told Real Madrid TV.

Real took the lead inside the opening quarter of an hour at Balaidos, Benzema slotting in a penalty after the referee penalised Celta's Peruvian midfielder Renato Tapia for handball following a VAR review.

Yet Celta won a penalty of their own midway through the first half as Eder Militao blocked a Goncalo Paciencia header with his arm, and veteran striker Aspas -- who scored 18 times last season -- made no mistake from the spot.

Franco Cervi then crashed a shot just wide as Celta threatened to go in front against a Real side playing their first game since agreeing to sell midfielder Casemiro to Manchester United.

However, Modric was back in the starting line-up and made it 2-1 three minutes before the interval, collecting possession in space 25 metres from goal and advancing before curling a tremendous shot high into the net from the edge of the D.

Real's class told after the break, as Modric sent Vinicius away to round goalkeeper Agustin Marchesin and slot in the visitors' third goal in the 56th minute.

It was 4-1 before the midway point in the second half, with Vinicius trying to pick out Benzema only for the Frenchman to slip, allowing the arriving Valverde to plant a low first-time shot into the far corner.

It could have been worse for Celta as Madrid won another penalty late on when Benzema was fouled in the box by Hugo Mallo.

Benzema left the spot-kick for Hazard, who had come on as a substitute, but the Belgian's kick was saved by Marchesin.

Penalties galore
That, remarkably, was the seventh penalty in three matches in La Liga on Saturday, with Borja Iglesias scoring twice from the spot as Betis won 2-1 at Real Mallorca earlier.

Golden State Warriors coach Steve Kerr was among the crowd watching as Iglesias gave Manuel Pellegrini's Betis a ninth-minute lead in the Balearic Islands after a handball by Mallorca's Rodrigo Battaglia was penalised following a VAR review.

Kosovo striker Vedat Muriqi headed Mallorca back level early in the second half from a Lee Kang-in cross, only for Betis to win another spot-kick when the unfortunate Battaglia blocked Nabil Fekir on his way into the area.

Iglesias, who also scored in last week's season-opening 3-0 defeat of Elche, again made no mistake with his 73rd-minute penalty, and Betis held on for a 2-1 win as Lee hit the woodwork from a late free-kick.

Osasuna beat Cadiz 2-0 in Pamplona thanks to two more penalties, with Chimy Avila converting the first late in the first half and Kike Garcia slotting in the second late on after Cadiz had Tomas Alarcon sent off.

After Osasuna defeated Sevilla last week they have now won their first two matches of the season in La Liga for the first time since 1981.