7 upazilas of Tangail are currently underwater as flood situation deteriorates 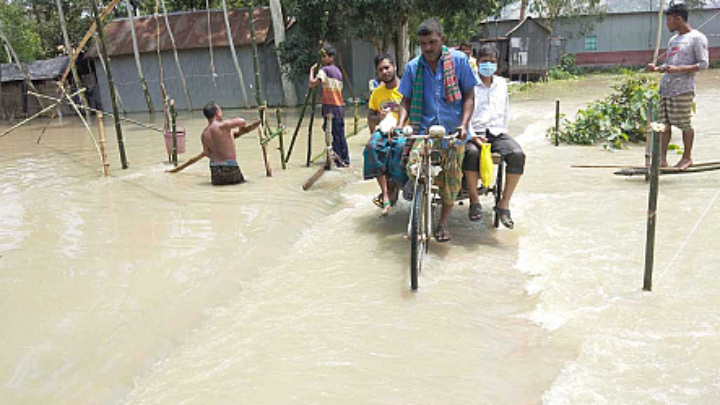 Around 6,300 hectres of cropland in seven upazilas of Tangail are currently underwater as the flood situation is deteriorating in the district.

Currently, three major rivers including the Jamuna are flowing above danger level, inundating new areas on their banks.

According to the Water Development Board, as of 9am Wednesday, the Jamuna River is flowing 56cm above danger level at Porabari point.

Meanwhile, the Jhinai River is flowing 62cm above danger mark at the Jokarchar point while the Dhaleshwari is 24cm above at the Elasin point.

If the water increases, the amount of land inundated and the damages to crops will increase, according to the agriculture department.

If the water goes down within a week, then the damage will be partial, says Department of Agricultural Extension Deputy Director Ahsanul Bashar.

Tangail Deputy Commissioner Ataul Gani said that the UNOs have been instructed to stand by those affected by floods.

Adequate relief has been allocated and medical teams have been formed, he said adding that the superintendent of police has been instructed to ensure security in the flood-affected areas.