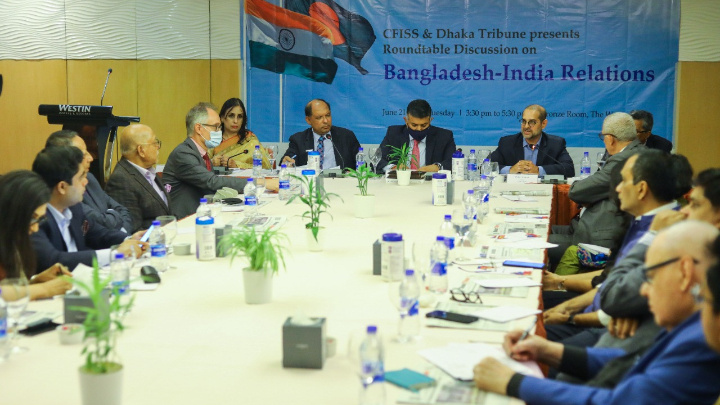 There is scope for significant improvement in bilateral relations between Bangladesh and India even though the two countries already boast strong ties, speakers at a roundtable have said.

They stressed the need to not only improve cooperation between the two neighbours, but also with other countries in the region.

The roundtable discussion on Bangladesh-India relations was jointly organized by leading English daily Dhaka Tribune and the Central Foundation for International and Strategic Studies (CFISS) at a Dhaka hotel on Tuesday.

The roundtable is part of a series of discussions on important national and international issues. He added that there are two areas where Bangladesh and India need to give extra attention: the Teesta water sharing agreement and India’s cooperation in resolving the Rohingya issue. “We are not seeing as many examples of regional cooperation as we used to. We have to think about the region as well,” he said.

Prothom Alo Head of English Web Ayesha Kabir said: “ The media has a huge role to play with regard to the relationship between Bangladesh and India.” “We need to open our eyes to recognise and acknowledge the activity that exists on both sides of the border. We need confidence building measures on both sides,” he said.

“The more Bangladeshis that get to India, the more Indians get accommodation, the better our relations are going to be. However many Bangladeshis study in India today, whatever the number is, it should be doubled or tripled. The same goes for medical tourism and business. Whatever we can do to allow ties across the board to be deepened is really what is needed,” said the Dhaka Tribune editor.

In response to the panellists, High Commissioner Vikram Doraiswami said: “We need to try and make relationships far more effective in terms of enhancing connectivity and interconnections in economics, investment and people movement. We need to enhance the capacity to exchange cultural products as well.” On the topic of Teesta water sharing, Doraiswami said the Indian government had repeatedly expressed its willingness to move forward with the treaty.

“We are ready to move forward with the treaty, but you have to understand the constitutional limits of power in India. River water is a sensitive subject in our states and, unfortunately, we have to take the concerns of our states on board,” he added.

Regarding cooperation within SAARC, Doraiswami said: “We certainly do want regionalism, but there is one country that has vetoed everything that we wanted to do, including connectivity with them. For greater regional cooperation, all countries have to be onboard.” He further said: “If you were to look at the last decade of our relationships, in particular the last six or seven years, from the Indian perspective then things have changed materially, dramatically and tangibly and fundamentally. Fundamentally, in the sense that there is belief that delivery of commitments that have been made on both sides are actually happening, things have actually moved forward on things that were next to impossible to contemplate doing. Remember, 1974 was when we came to an agreement on our boundary, it was 2015, when we actually exchanged enclaves.”

About maritime time boundaries, the high commissioner said India has abided by the judgement of the international tribunal because it is part of the regulations of the tribunal that this is not subject to reinterpretation or subsequent dispute.

On the extension of trade between Bangladesh and India, the high commissioner mentioned that India has had duty-free, quota-free access to almost all Bangladeshi products for the last 11 years. “However trade still isn’t working because the cost of doing business from Bangladesh to India is too high.”

About cross-border bus and train services, he said: “We have for the last four years been repeatedly offering an open skies arrangement. Also, we are ready for more rail services, but that capacity really doesn't exist here in Bangladesh.”