Canada: Eight Indo-Canadians among 11 who pose threat to public in British Columbia 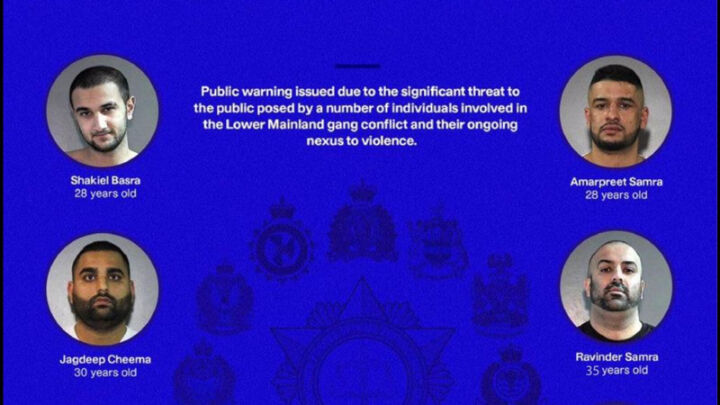 TORONTO: Law enforcement in the province British Columbia has issued a warning listing 11 individuals linked to gangs who pose a threat to the public and eight of those included are Indo-Canadians.

The warning was released on social media by the Combined Forces Special Enforcement Unit (CFSEU-BC), which said this was being done “due to the significant threat to the public posed by a number of individuals involved in the Lower Mainland gang conflict and their ongoing nexus to violence”. That refers to the Metro Vancouver area including town like Surrey.

CFSEU spokesperson spokesperson Sgt Brenda Winpenny tweeted, “These individuals pose a significant threat to the safety of our communities. Please be vigilant in taking precautions for your personal safety. To those involved, we can help you get out.”

This is the second year in a row the unit has issued a public warning listing alleged gangsters. Among those listed in 2021 was Meninder Dhaliwal. He doesn’t figure in the latest list because on July 24, he was gunned down in the town of Whistler, along with Satindera Gill. Two persons were arrested in that regard: 24-year-old Gursimran Sahota and 20-year-old Tanvir Khakh, both from the town of Surrey. The warning added, “Police believe any with, or in the proximity to these individuals may be putting themselves at risk.”

That the majority of those listed are Indo-Canadians are point to the surge of such activity within the community in the area.

It comes after an explosion in gang-related violence in the region over the summer, which included the killing of Dhaliwal and Gill.

Among the victims was Ripudaman Singh Malik was killed in a “targeted” gangland-style homicide on July 14, in Surrey. Malik, was once an accused in the terrorist bombing of the Air India flight 182, the Kanishka in 1985, which claimed 329 lives. He was acquitted of all charges. Two persons were arrested in connection with the killing.

CFSEU-BC is the largest integrated police programme in Canada, made up of members from every police department in BC.
Hindustan Times