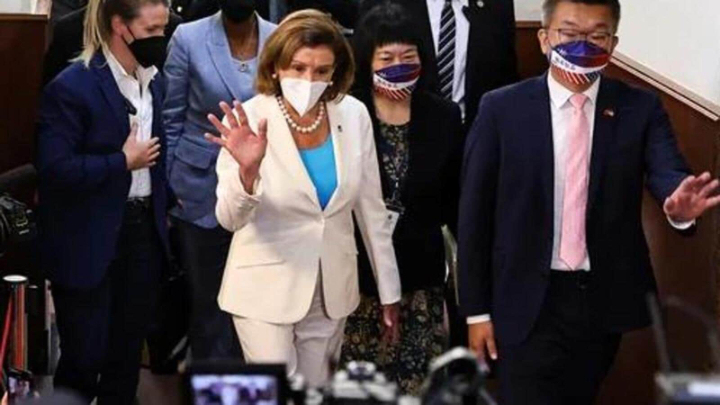 An enraged China summoned US envoy Nicholas Burns late on Tuesday night to lodge “strong protests” over Speaker of the US House of Representatives Nancy Pelosi’s visit to Taiwan, a self-ruled democracy claimed by Beijing as its own.

Burns was summoned to the Chinese foreign ministry by vice foreign minister Xie Feng soon after Pelosi’s flight landed in Taipei and as tension mounted between Beijing and Washington over the visit.

Burns was “urgently summoned” even as the Eastern Theatre Command of the People’s Liberation Army (PLA) launched a series of joint military operations around Taiwan from Tuesday night, the largest show of Chinese military might in recent years.

The PLA started joint training exercises in the maritime areas off the northern, southwestern and southeastern coasts of the island and their air space, conduct long-range live-fire drills in the Taiwan Strait and conventional missile tests in the waters off the eastern coast of the island, the Chinese defence ministry announced late on Tuesday, voicing its strong opposition against Pelosi’s visit.

“Noting that Pelosi risks universal condemnation to deliberately provoke and play with fire, Xie said that this is a serious violation of the one-China principle and the three China-US joint communiques,” China’s official news agency, Xinhua, said in a report early on Wednesday.

“The move is extremely egregious in nature and the consequences are extremely serious. China will not sit idly by,” Xie noted.

“It (the US) deleted the key expressions such as Taiwan is part of China from the US State Department website, put Taiwan in its so-called ‘Indo-Pacific strategy’, openly upgraded its ties with Taiwan and increased arms sales to the region and supported separatist activities for ‘Taiwan independence’,” Xie said.

Using strong rhetoric, Xie said: “Taiwan is China’s Taiwan, and Taiwan will eventually return to the embrace of the motherland. Chinese people are not afraid of ghosts, pressure and the evil”.

“The entry of citrus fruits including grapefruits, lemons and oranges, as well as chilled large-head hairtail and frozen horse mackerel from Taiwan will be suspended in accordance with the mainland’s relevant regulations, and food safety requirements,” said Ma Xiaoguang, a spokesperson for the Taiwan Affairs Office of the State Council.

Ma said that these companies have donated money to the foundations like the “Taiwan Foundation for Democracy” and “International Cooperation and Development Fund”, organisations Beijing accuses of fanning “Taiwan independence”.
Hindustan Times