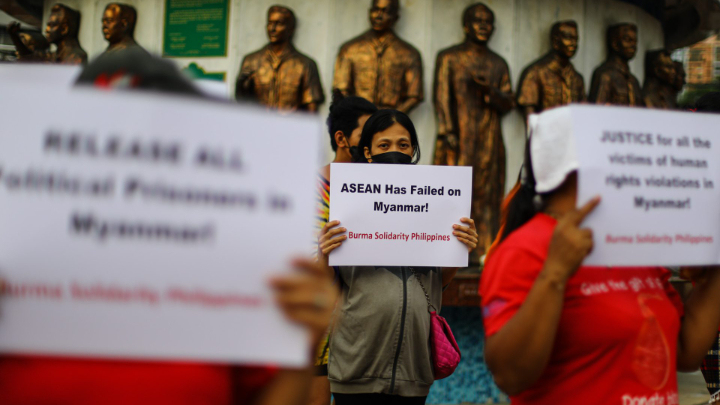 Current Asean chair Cambodia warned Myanmar on Wednesday not to execute any more prisoners after the hanging of four people -- two of them prominent pro-democracy figures -- caused international outrage.

Foreign ministers from the Association of Southeast Asian Nations (Asean) are discussing how to address the growing crisis in Myanmar at talks in Phnom Penh.

The 10-nation regional bloc has spearheaded so far fruitless efforts to restore peace to the country after a military coup last year, and anger is growing at the junta's stonewalling tactics.

Myanmar executed four prisoners last month in a move roundly condemned by Asean members, who are voicing increased frustration at the lack of progress on the regional bloc's "five-point consensus" plan on Myanmar's conflict.

Agreed in April last year, the plan calls for an immediate end to violence and dialogue between the army and coup opponents.

"If more prisoners are to be executed, we will be forced to rethink our role vis a vis Asean's five-point consensus," Cambodian Prime Minister Hun Sen said as he opened the foreign ministers' gathering.Hun Sen said the bloc was "disappointed and disturbed by the execution of these opposition activists despite the appeals from me and others for the death sentences to be reconsidered for the sake of political dialogue, peace and reconciliation."

But with no Myanmar representatives present for the summit -- highlighted by the country's prominently placed empty chair -- Cambodia's Asean spokesman admitted Tuesday that progress over the conflict might be tricky.

The February coup has left Myanmar in disarray, with the death toll from a brutal military crackdown on dissent passing 2,100, according to a local monitoring group.