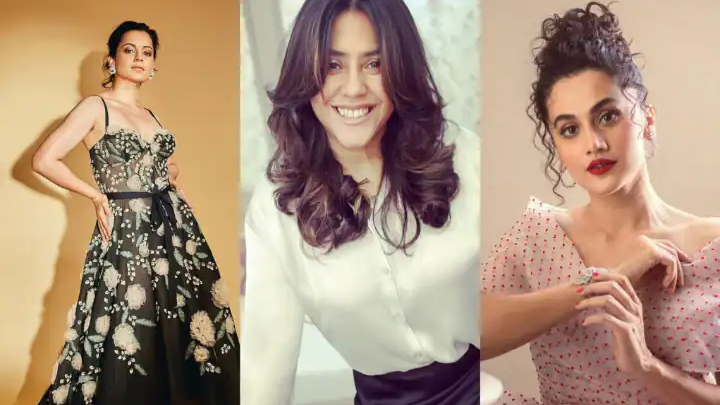 Taapsee Pannu stars in Dobaaraa, directed by Anurag Kashyap and produced by Ekta Kapoor. The film’s trailer was launched in Mumbai on Wednesday. At the event, Ekta was asked about Kangana Ranaut calling Taapsee a ‘sasta (cheaper)' version of herself. The producer reacted to the question by saying it was not her or the media's job to ‘play them against each other’. Ekta added there was ‘only one similarity’ between Kangana and Taapsee – they are both ‘amazing trailblazer women’.

Kangana Ranaut had tweeted about Taapsee in March last year, and called her a 'sasti' actor. Kangana had written, "You will always remain sasti because you are sab rapists ka feminist... your ring master (Anurag) Kashyap was raided in 2013 as well for tax chori... government official’s report is out if you aren’t guilty go to court against them come clean on this ... come on sasti. Kangana’s sister Rangoli Chandel had also called Taapsee a ‘sasti copy (cheap imitation)’ of the actor.

Ekta, who has worked with both Kangana and Taapsee – she produced Judgemental Hai Kya, which starred Kangana and Rajkumar Rao, and was also the producer for Kangana's reality show Lock Upp – called them both ‘brilliant actors’ on Wednesday. When asked to respond to Kangana taking a dig at Taapsee and calling her ‘sasti’ copy of herself, Ekta said, "There is only one similarity, both (Kangana and Taapsee) are amazing trailblazer women and to play them against each other is not your and my job. We are women, we adjust each other’s crown, not remove it.”

Ekta Kapoor also shared her experience of working with Kangana and Taapsee and said, “It’s an amazing thing to collaborate with such amazing actors. If there’s an interesting project, I will only approach the actor and request them to read the script. So, it is a heartening thing to work with great actors. They bring in a lot more, Kangana is a brilliant actor and so is Taapsee."

Taapsee will soon be seen in Ekta Kapoor-backed Dobaaraa. The thriller will release in theatres on August 19 and also stars Rahul Bhatt, Saswata Chatterjee and Pavail Gulati, among others. The project marks the reunion of Anurag Kashyap and Taapsee after Manmarziyaan.