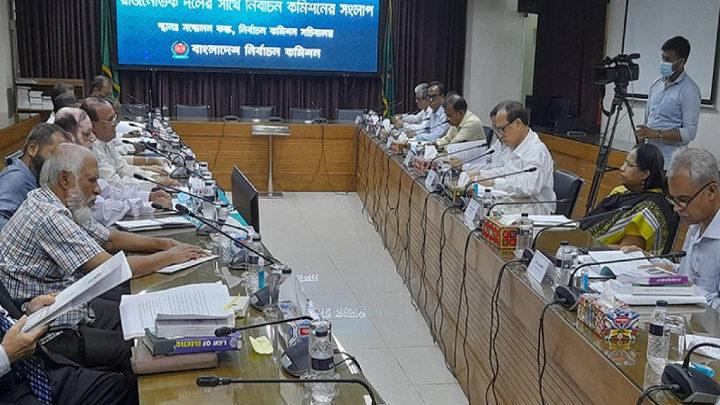 The Dr Kamal Hossain-led Gonoforum has asked for a caretaker government for holding the next Parliamentary election.

A written proposal was submitted by a Gonoforum delegation after a dialogue with the Election Commission on Thursday.

A delegation led by the party’s executive president Mokabbir Khan participated in the dialogue.

In the proposal, the party said no election commission has been able to fulfil the demand of the political parties and the masses and that many have failed miserably.

Ganaforum expects that the present commission will take this challenge and will be able to gain the trust of all political parties and people.

“We are not in favour of the Electronic Voting Machine (EVM). Elections that have been conducted using EVMs have failed miserably to meet people’s expectations. Hopefully, the commission will clarify their position on the matter soon,” added the proposal.

During the dialogue, the party proposed introducing a caretaker government for holding the next national election, persons involved in elections to be engaged with the Election Commission, EC to be completely independent in declaring election schedule and making election rules, conferring judicial powers on the EC for a specific period, inclusion of expatriates in electoral roll and provision of voting, constituency-based all-party monitoring team formation, list of international observers to be published one month before the polls, transparent ballot box, counting of votes and declaration of results in the presence of all at the polling station and disposing off  Election Tribunal cases within two months.
Dhaka Tribune