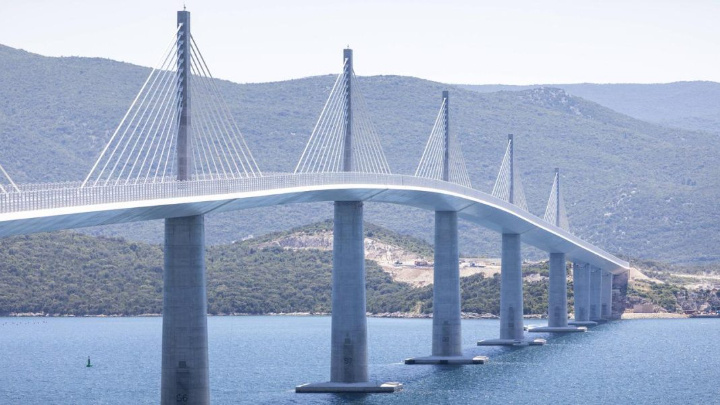 The completion of the long-awaited Peljesac bridge that connects the southern coastal regions to the rest of the country is one of the most significant events in Croatian history.

Croatians formerly had to cross Bosnia and Herzegovina's territory.

China constructed the 2.4 km (1.5 km) long bridge. However, the European Union provided the majority of the funding, reports BBC.

Celebrations were held all day long. A total of 250 runners were given the opportunity to cross the bridge on foot before it was open to traffic.

The opportunity to stroll along the first section of the bridge was also utilised by locals as they watched tiny boats flying Croatian flags pass beneath the six pylons, adds the BBC report.

Croatian Prime Minister Andrej Plenkovic said, "Tonight, we are unifying Croatia!" and referred to the bridge as a necessity rather than a luxury. Chinese Premier Li Keqiang is also scheduled to offer a video message at the ceremony.

The EU paid 85 percent of the expenses with cohesion funding which is €357 million (£300 million). The bridge would greatly enhance Croatians' quality of life, the EU had said.

After the former Yugoslavia broke up making Croatia independent in 1991, the country was split by the 9 km long section of Bosnian coastline known as the Neum corridor.

Bosnia's right to access to the coast dates back to 1699, when Neum was given over by Dubrovnik (modern-day Croatia) to the Ottoman Empire.

Before the bridge, anyone trying to cross from the Peljesac peninsula to the mainland or travel north from the historic city of Dubrovnik on the southernmost Adriatic coast had to go through two border checks because Bosnia is not a member of the EU but Croatia is. However, now they can use the bridge to go directly along Croatia's Adriatic coast.

Dragan Jurkovic, the mayor of Neum, told Bosnian TV that the new bridge will lessen summertime traffic along the coast and that he could only see advantages for it. However, some business owners and traders were worried about how the reduction in traffic might affect the local economy.

Neum has seen a steady influx of tourists, many of whom are Czechs, Poles, and Germans; nevertheless, the area's reputation for having far lower pricing than Dubrovnik is now expected to change.

However, the bridge has not been without controversy always.

Bosnia initially complained the bridge would affect its access to the sea before Croatia agreed to increase the structure's height to 55m (181ft).

When Croatia agreed to raise the bridge's height to 55 metres, Bosnia stopped complaining about how it would impede its ability to access the sea (181 ft).

The China Road and Bridge Corporation (CRBC), the Chinese state-owned business that got the bridge contract for Croatia, submitted a bid that was significantly lower than that of its European rivals. Due to this, an Austrian company complained, claiming that CRBC was "price-dumping" and obtaining state aid from China.

According to the official news agency of China, Xinhua, the bridge opening was anticipated to increase mutual confidence and cooperation between Beijing and Zagreb.