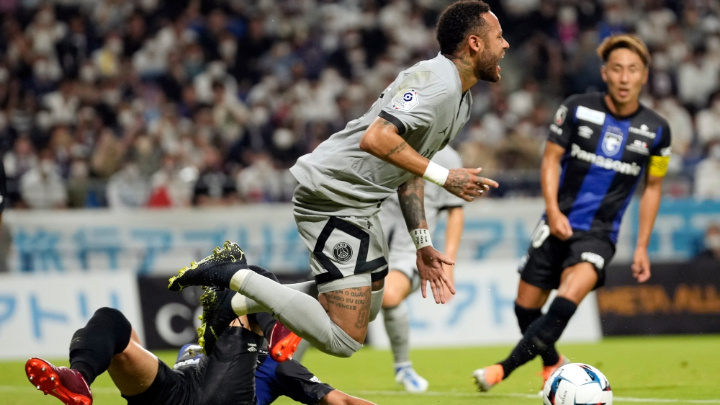 Neymar may have produced the worst dive of his career during Paris Saint-Germain's friendly with Gamba Osaka on Monday.

The Ligue 1 champions ran out 6-2 winners and raced to a 4-1 lead before the break.

Pablo Sarabia, Neymar, Nuno Mendes and Lionel Messi were all on target in a thrilling 45 minutes.

Neymar's first goal came from the penalty spot and the way he won it was incredibly controversial.

Genta Miura pulled his foot away after going to ground for a challenge and if there was contact, it was minimal.

That didn't stop Neymar from flinging himself to the ground and rolling towards the camera in agony.

Miura and his teammates pleaded his case but the referee pointed to the spot.

Neymar would go on to convert his spot-kick and double his side's lead.

The Brazil international is regarded as one of the best players of his generation, but his antics on the pitch rub supporters the wrong way.

Neymar has a reputation for making a meal out of challenges and this could be the worst instance.

In the same game, we saw the best of the 30-year-old as he set up Messi and scored again in the second half.

Fans have reacted the video and they're not impressed.

One person said: "Why on earth is he diving in a friendly?"

A second tweeted: "Was this even necessary? They were already winning."

Someone put: "Such a soft player, always rolling around in fake pain."

While another added: "He does this to himself man."

Kylian Mbappe scored a penalty of his own late in the second half to make it four wins out of four under new manager Christophe Galtier.

Neymar has been linked with a move away from the Parc des Princes this summer and the club are said to be open to his departure.

Despite that, the world's most expensive player is keen to stay.

He told reporters last week: "I want to stay at the club. I am still under contract for a few years. So far, the club has not told me anything like this [about wanting me to leave].

"I have nothing to prove to anyone. People know me, know who I am, how I behave on the pitch, what my game is.

"I don't need to prove myself. I just need to play my football to be happy. People talk too much. And they talk too much because they can't do anything else."