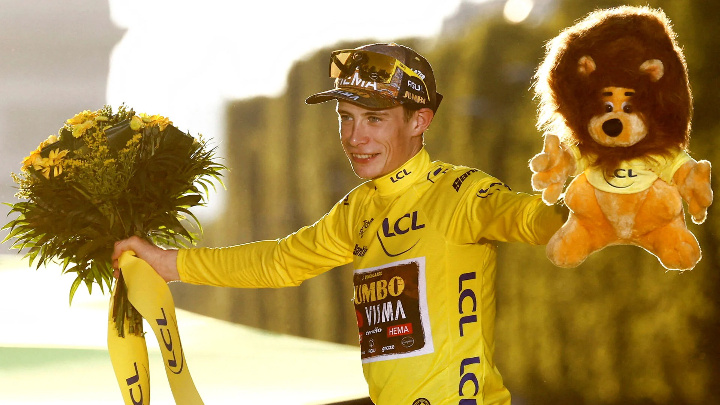 Jonas Vingegaard was crowned Tour de France champion on Sunday after a gruelling 3,350km, 21-stage race, ending a journey which had its roots in the mundane surroundings of a fish factory in his native Denmark.

He follows compatriot Bjarne Riis who won the world's most famous bike race -- although later admitted to doping -- in 1996, the year Vingegaard was born.

"Every day was quick, fast, it's been rough. There has been a lot of attacking. It must have looked good on television," said the champion.

It is a stunning success for Vingegaard, three weeks after the race pedalled off from Copenhagen for the first of three stages on home ground.

Over 35,000 paying fans had packed into Copenhagen's Tivoli Gardens to greet the Tour de France riders before the race.

When it came to the turn of Dutch outfit Jumbo Visma, a roar went up which seemed to overwhelm the 25-year-old co-captain of the team, a quiet, unassuming rider.

Fighting back tears, Vingegaard looked far from a future champion of one of sport's most difficult endurance tests.

On the opening day time-trial, a wall of sound reverberated around Copenhagen, as their home hope's progress was tracked along the downtown route.

While much of the rest of the world was unaware of Vingegaard, the man from northern Jutland was already a household name at home.

That was not only because of his cycling skills, but his mother-in-law who shot to national celebrity after competing on the Great Danish Bake Off show, and also featured on Denmark's version of Dancing with the Stars.

Vingegaard was born in December 1996 and raised in Hillerslev, a fishing village of just 370 inhabitants, in a completely flat landscape on the shores of the North Sea.

Denmark's previous Tour winner Riis was born in Herning, around 100km from Hillerslev.

As a child, Vingegaard played handball and football and was an avid fan of Liverpool, before turning to cycling after watching the Tour of Denmark pass close to his home.

With his slender frame and the windy flatlands of Denmark, his staggering climbing skills were yet to be revealed.

He joined Colo-Quick, a continental Tour team, at 19 and worked in a fish business in the mornings before training.

"I had to get up early, but it gave me something to do, and I wasn't sure if I would become a professional cyclist," Vingegaard said.

It was at Colo-Quick that he met his partner Trine Hansen, a marketing manager who is nine years his senior, with the couple having a young daughter Frida.

"He told me he was going to be a banker, and I thought I'd be a banker's wife," Hansen said this week.

Vingegaard joined Jumbo in 2019, where he says he "learned to cycle".

He came to prominence at last year's Tour de France, where riding under the radar he suddenly found himself team leader when Primoz Roglic crashed out, finishing second.

Shy and retiring, he refuses nearly all television engagements, relying on Trine to front the family image while he gets on with the cycling.

He relentlessly thanks her when interviewed, speaking of "his two girls at home" being the rocks of his life.

"He knew my name," said Vingegaard who admits he has had problems in the past with self-confidence.

On this Tour, he bettered two-time defending champion Tadej Pogacar on both the toughest mountain stages to clinch the champion's yellow jersey that will make him a hero in his homeland.

"I don't know how this will effect our lives, but I grew up somehow," said Vingegaard. "But I feel better than ever".

* Played soccer as a child and became involved in cycling as a 10-year-old after watching the Tour of Denmark.

* Worked part-time at a fish auction and fish factory while pursuing a cycling career before turning professional aged 19, when he joined Danish Continental team ColoQuick in 2016.

* Joined Team Jumbo-Visma in 2019 and earned his first major professional victory later that year with a stage win at the Tour de Pologne.

* Made his Grand Tour debut in a COVID-interrupted 2020 season, supporting team mate Primoz Roglic in his overall victory at the Vuelta a Espana.

* Had his breakthrough in 2021, winning a stage of the UAE Tour and claiming the overall victory in the Settimana Internazionale Coppi e Bartali in Italy.

* Finished second behind Roglic in the Tour of the Basque Country and made Jumbo-Visma's Tour de France squad.

* Rose to prominence at the Tour de France, finding himself team leader after Roglic pulled out following an earlier crash, and took second place on the podium behind champion Tadej Pogacar.

* Geared up for the 2022 Tour de France by finishing runner-up in the Criterium du Dauphine.

* Won his first Grand Tour title at the Tour de France and became the second Danish rider to triumph in Paris after Bjarne Riis prevailed in 1996.