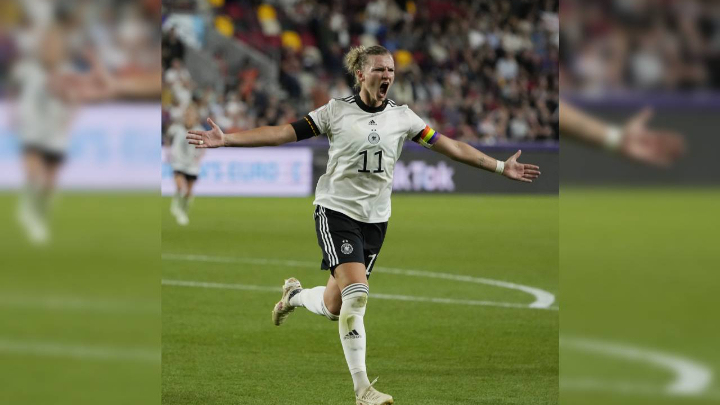 Alexandra Popp seem destined never to play at a European Championship due to injury, but the veteran striker is now leading Germany's charge back to the top of the women's game at Euro 2022.

An Olympic gold medallist and Champions League winner at club level with Wolfsburg, the Euro had been the bete noire of the 31-year-old's glittering career until touching down in England a few weeks ago.

Her determination to play in Wolfsburg's Champions League final win over Lyon despite ankle ligament damage ruined her chances of playing at Euro 2013.

Four years later it was a knee issue that cost Popp a place in the squad for Euro 2017.

Further injury woe looked set to derail what will realistically be her last chance to be crowned a European champion at international level.

Popp has had two more knee operations on her meniscus over the past 15 months, only making a comeback in March.

And even when she proved her fitness in time to be selected by Martina Voss-Tecklenburg, Popp's pre-tournament preparations were disrupted by a positive test for coronavirus.

A trained zookeeper, Popp has reacted like a caged animal since being released upon the tournament as a substitute in Germany's opening game against Denmark.

In her 115th appearance for Germany, she took just 25 minutes to score on her first match at the Euro with a diving header to cap a 4-0 win over the Danes.

In an emotional celebration the striker sank to her knees and appeared on the verge of tears in what she later described as the most emotional moment of her career.

Another Covid-19 case in the German camp to Lea Schueller then opened the door for Popp to start against Spain, which she marked with another headed finish.

Further goals against Finland and Austria in the quarter-finals have made Popp the first player to score in four consecutive games at the same women's Euro.

Her desire to make a mark was made clear by the sprint to charge down a clearance by Austrian goalkeeper Manuela Zinsberger in the final minute of the 90 that rebounded into the net.

"There are few players in the world who have similar qualities," said former Germany women's coach Horst Hrubesch this week.

Popp's presence has been vital not just on the field for a fresh-faced German team trying to restore their grip on the European game.

Die Nationalelf have dominated the Euro over the years, winning the title eight times.

However, progress to the last four in England is their first semi-final at a major tournament since the 2015 World Cup.

As one of the older stateswomen in the squad, Popp was part of a delegation to negotiate bonuses from the German football association that could rise to 60,000 euros ($61,000) per player for winning Euro 2022.

That payout is just two games away as Germany have swept all before them so far in winning all four games without even conceding a goal.

Germany's toughest test yet awaits against France in Wednesday' semi-final, but Popp has plans in mind for the final in front of a sold out Wembley on Sunday.

"How about raising the trophy in the air?" Popp said. "That sounds like a good plan."
BSS