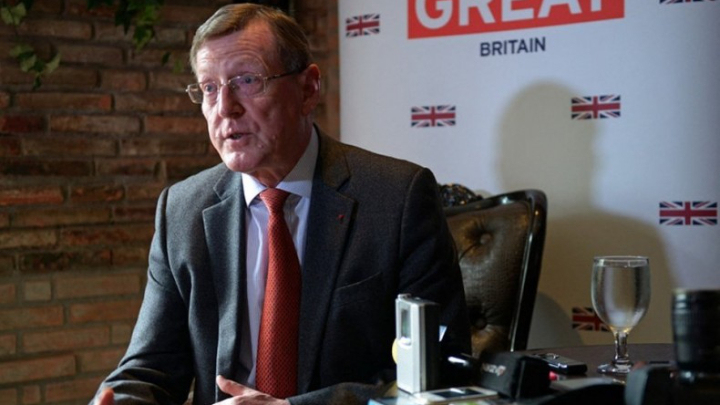 Trimble, a key architect of the landmark 1998 peace deal in the troubled UK province, won the prize along with pro-Irish leader John Hume that year after the pair sealed the historic agreement.

"It is with great sadness that the family of Lord Trimble announce that he passed away peacefully earlier today following a short illness," the Ulster Unionist Party (UUP) said in a statement.

No further details were provided about his death.

He "will be long remembered for his intellect, personal bravery and fierce determination to change politics for the better", Johnson tweeted.

Irish premier Micheal Martin hailed the Nobel prize winner as "someone who played a crucial and courageous role in bringing peace to Northern Ireland".

"All of us in politics at the time witnessed his crucial and courageous role in the negotiations leading to the (1998) Good Friday Agreement and his leadership in building support in his party and his community for the agreement," he added.

Sinn Fein's Michelle O'Neill, in line to be Northern Ireland's next first minister after her nationalist party swept to a historic victory in assembly elections in May, lauded Trimble's "very significant contribution to the peace process".

"His courage in helping achieve the Good Friday Agreement leaves a legacy a quarter-century on for which he and his family should be rightly proud," she added.

Trimble's death comes at a time of renewed tensions in Northern Ireland with the now-dominant pro-UK force, the Democratic Unionist Party (DUP), refusing to serve under O'Neill until London rips up a post-Brexit trading pact with the European Union.

The UK government is pushing through legislation to unilaterally rewrite the so-called Northern Ireland Protocol, sparking legal action by the EU.

But the DUP has still refused to enter the power-sharing government with Sinn Fein.

UK Foreign Secretary Liz Truss, who drafted the contentious legislation and is running to succeed Boris Johnson as prime minister, praised Trimble as "a great figure".

He was, she tweeted, "instrumental in delivering the Belfast Good Friday Agreement and the optimistic Northern Ireland of today".

At the start of a televised debate with Truss, her Conservative party rival Rishi Sunak also lauded Trimble as "a giant of unionism" who was "a deserving winner of the Nobel Peace Prize".

The 1998 Good Friday accord largely ended 30 years of conflict in Northern Ireland that killed 3,500.

Despite resistance within the unionist community, which steadfastly believes in Northern Ireland's place within the United Kingdom, Trimble brought his party to the table in the fraught peace talks.

As part of the process he became the party's first leader in 30 years to meet with the Irish premier in Dublin, and in 1997 he became the first unionist leader since Ireland's partition to negotiate with Sinn Fein.

The nationalist party leader's at the time, Gerry Adams, acknowledged the challenges that Trimble faced persuading his own side.

"David's contribution to the Good Friday Agreement and to the quarter-century of relative peace that followed cannot be underestimated," he said.

However, the UUP's popularity waned amid unionist dislike for elements of the 1998 accord seen as too accommodating to republicans.

The rival DUP eventually supplanted it as the biggest unionist party.

"Throughout some of the most difficult years of the Troubles, David was a committed and passionate advocate for the Union, at a time when doing so placed a considerable threat to his safety," he said.

"He leaves a huge and lasting legacy to Northern Ireland. He can undoubtedly be said to have shaped history in our country."

Trimble, who led the UUP for a decade from 1995, lost his UK House of Commons seat in 2005 and sat as a peer in the House of Lords -- the upper chamber of the British parliament -- from 2006.
Hindustan Times