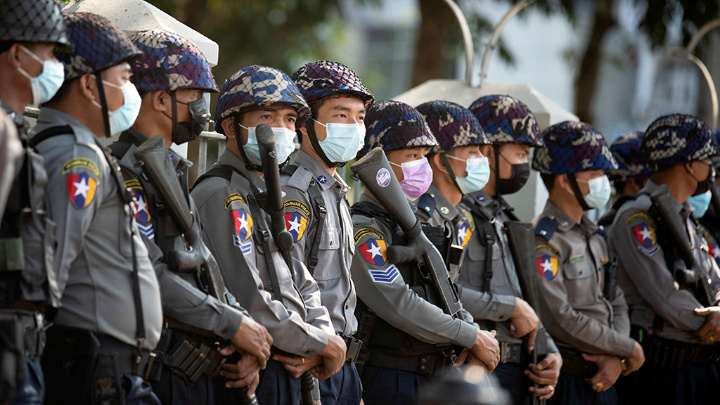 Sentenced to death in secretive trials in January and April, the men were accused of helping a civilian resistance movement that has fought the military since last year's coup and bloody crackdown on nationwide protests.

State media said "the punishment has been conducted", but did not say when, or by what method. Previous executions in Myanmar have been by hanging.

The shadow National Unity Government (NUG), which is leading efforts to undermine the junta's attempts to rule Myanmar, said it was time for an international response.

"The global community must punish their cruelty," said Kyaw Zaw, a spokesperson for the NUG president's office.

Myanmar has been in chaos since the February 1, 2021 coup, with the military, which has ruled the former British colony for five of the past six decades, engaged in battles on multiple fronts with newly formed militia groups.

UN Secretary-General Antonio Guterres strongly condemned the executions and called again for the release of all arbitrarily detained prisoners, including Suu Kyi.

In a joint statement, the European Union, Australia, Canada, Japan, New Zealand, Norway, South Korea, Britain and the United States described the executions as "reprehensible acts of violence that further exemplify the regime's disregard for human rights and the rule of law."

Amnesty International's death penalty adviser, Chiara Sangiorgio, said the executions were "an enormous setback" and that the junta is "not going to stop there."

One video showed several masked protesters chanting and carrying a large banner down on a street in Yangon that read "We will never be frightened" before turning to run.

Hiding Bodies Away
The executions were the first carried out among some 117 death sentences handed down by military-run courts since the coup, according to the Assistance Association for Political Prisoners (AAPP), which has been tracking arrests, killings and court verdicts in Myanmar.

Families of the executed men were denied the opportunity to retrieve their loved ones' bodies, said Thazin Nyunt Aung, wife of Phyo Zeyar Thaw, comparing it to murderers covering up their crimes.

"This is killing and hiding bodies away," she told Reuters. "They disrespected both Myanmar people and the international community."

Nilar Thein, wife of Kyaw Min Yu, said she would hold no funeral without a body.

"We all have to be brave, determined and strong," she posted on Facebook.

The men were held in Yangon's Insein prison, where families visited last Friday, according to a person with knowledge of the events, who said prison officials allowed only one relative to speak to the detainees via video call.

"I asked then 'why didn't you tell me or my son that it was our last meeting?'" Khin Win May, the mother of Phyo Zeyar Thaw, told BBC Burmese.

The junta made no mention of the executions on its nightly television news bulletin on Monday.

Its spokesperson last month defended the death sentences as justified, and used in many countries.

Heinous Execution
The White House condemned the "heinous execution of pro-democracy activists and elected leaders." U.S. State Department spokesperson Ned Price said Washington was considering further measures in response to the junta, adding that "all options" were on the table, when asked specifically on potential sanctions on the country's gas sector.

Price urged countries to ban sales of military equipment to Myanmar, not do anything that could lend the junta any international credibility.

US Senate Foreign Relations Committee Chairman Bob Menendez in a statement urged President Joe Biden to impose sanctions on Myanma Oil and Gas Enterprise, among others.

Senate Republican leader Mitch McConnell, who has long had close ties to Suu Kyi, called on Myanmar's neighbours to respond. "If they will not step up and impose meaningful costs on the junta the Biden administration should use authorities already given to it by Congress to sanction Burma's energy sector," he said.

France condemned the executions and called for dialogue among all parties.

China's foreign ministry urged all parties in Myanmar to properly resolve conflicts within its constitutional framework.

Others called for swift sanctions.

The AAPP says more than 2,100 people have been killed by security forces since the coup. The junta says that figure is exaggerated.

The true picture of violence has been hard to assess, as clashes have spread to more remote areas where ethnic minority insurgent groups are also fighting the military.

The executions have shattered hopes of any peace agreement, said the Arakan Army (AA), one of more than a dozen ethnic minority armies in Myanmar that have fought the military for years.

The executions will close off any chance of ending the unrest across Myanmar, said analyst Richard Horsey of the International Crisis group. The military "sees this as a demonstration of strength, but it may be a serious miscalculation."
Dhaka Tribune