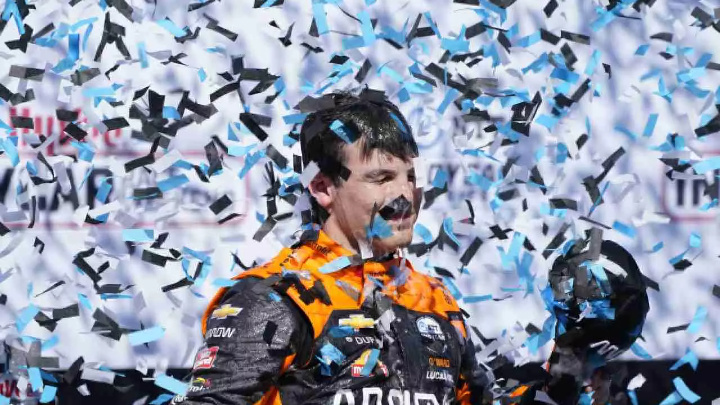 O'Ward took the lead when Newgarden crashed out due to a suspension failure then kept it after a final pit stop under caution in the 300-lap feature on the 0.894-mile oval at Newton, Iowa.

"Super stoked. Super happy," O'Ward said. "It was all about capitalizing and being there when we needed to be."

Indianapolis 500 winner Marcus Ericsson of Sweden, who finished sixth, kept the season points lead 403-395 over Power with Newgarden and Dixon 34 points behind and O'Ward 36 adrift.

"We're still in the lead and now we're going to tracks where we know we're strong, so I'm happy about that," Ericsson said.

Newgarden started second and led 148 laps but his race ended with 65 laps remaining with a crash in the fourth turn, the American losing control low and spinning into the outer wall.

Newgarden was near the first IndyCar weekend sweep in five years after winning Saturday's race.

"I want to cry," Newgarden said. "So sad for my team. I don't know what happened. I didn't know it happened until I was in the wall."

Newgarden appeared to be unharmed in the crash but after he was examined and released from the infield medical center he fell in a trackside motor home and was taken to hospital in Des Moines for further evaluation.

"We just want to send him downtown just for further evaluation because we don't have the ability to get more advanced imaging or radiographs," doctor Geoffrey Billows, IndyCar medical director, said. "But he's awake and talking to us."

He said Newgarden was flown by helicopter "only because it's so far to Des Moines."

"It's a 45-minute drive, and we've got all this concert traffic and everything, we were afraid it was going to be delayed, and the helicopter was sitting here," Billows said.

"We just felt out of the abundance of caution, we wanted to make sure he doesn't have any kind of head injury."

Power settled for his second podium of the weekend and sixth of the year.

"You'd love to get the win. Still a good day," Power said. "We were really fast. Good to be on the podium and close on the points lead."

"The top three were pretty quick," he said. "Good points day for us."

"This is a really special day for me," he said. "I really felt like a podium was within our reach."

Power can match Mario Andretti's all-time record of 67 IndyCar pole positions next Friday on the Indianapolis Motor Speedway road course in qualifying for next Saturday's 13th of 17 season races.

The Aussie has won six poles on that track.