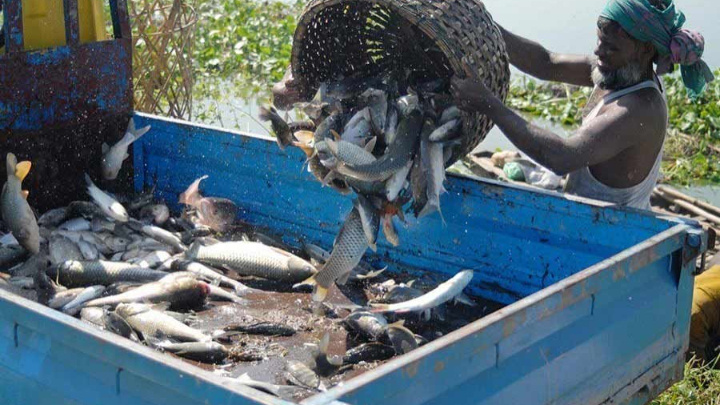 “We can process the fish or we can produce various types of products from fish and export those… any country in the world will import those. I think that the new generation will come forward further to set up such industries that will create employment opportunities for them and reduce unemployment,” she said.

The prime minister said this while formally inaugurating National Fisheries Week 2022 with the theme “Nirapad Machhe Bhorbo Desh, Bangabandhur Bangladesh” (the country will be filled with safe fish, Bangabandhu's Bangladesh).

The program was held at Bangabandhu International Conference Center where the Prime Minister joined virtually from her official residence, Ganabhaban.

This year’s Fisheries Week will be celebrated on July 23-29.

Sheikh Hasina said setting up fish processing industries will also be beneficial for the country to meet the local demand.

“I believe that this way we will be able to advance our country further,” she said.

She urged all to remain alert regarding catching shrimp fry using net in various coastal areas including Cox’s Bazar and Kuakata as this method destroys many varieties of fish fry.

The prime minister put emphasis on utilizing the Haor areas of the country for fish production.

“The Haor areas of the country have immense potential not only in producing rice but also fish. For that purpose we have set up fish landing stations in various parts of various Haors across the country,” she said.

Earlier, on behalf of the prime minister, Agriculture Minister Abdur Razzaque Handed over the National Fisheries Award among the recipients.

A documentary on the development of fishery sector was also screened at the program.