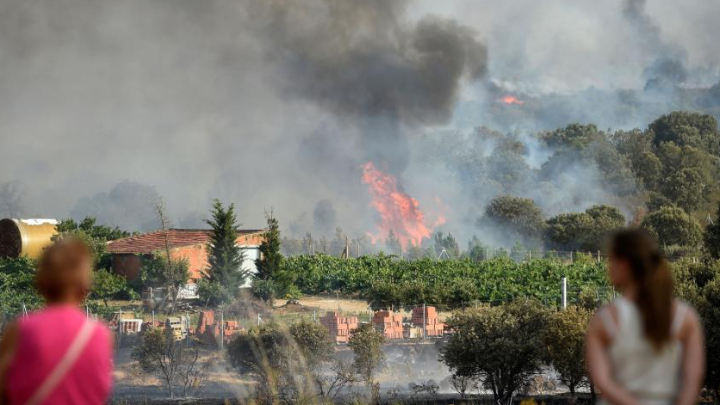 The death of a Madrid street sweeper from heatstroke during the heatwave gripping Europe shows the dangers outdoor workers face from extreme temperatures.

With heatwaves predicted to become more frequent and intense, unions are pushing for more protection for rubbish collectors, farm labourers, construction workers and others who work in the heat.

Under a deal reached between Madrid city hall and unions on Tuesday, manual street cleaning in the Spanish capital will be eliminated when temperatures rise above 39 degrees Celsius (102 degrees Fahrenheit).

In addition, shifts on days with extreme heat will start later to avoid the most intense heat.

The agreement comes after a 60-year-old street cleaner on a one-month contract died on Saturday, after he collapsed in the street from heatstroke while working the previous day.

At the time temperatures in Madrid neared 40C.

A 56-year-old warehouse worker in a Madrid suburb also died on Saturday after suffering heatstroke while on the job.

Emergency services said they found him unconscious, convulsing and with a body temperature of 42.9C.

"It's scary," said 52-year-old construction worker Javier Herreros, who wore a thick neon vest as he replaced cobblestones in the centre of Madrid under a blazing sun.

The past few days have been "very difficult", he added.

"I don't have health problems but since I work all day in the sun, I get really tired."

Workers have suffered heat-related deaths elsewhere in Europe this month as temperatures of more than 40C have spelt misery for millions and shattered heat records.

Their deaths came a year after the heat-related death of a 27-year-old seasonal worker from Mali prompted several Italian regions to ban farm work during the hottest hours.

And this week two people died in separate accidents in France which are "possibly" linked to the heatwave, health authorities said Wednesday.

Across Europe the authorities have in recent days urged people to work from home if they can, and to take precautions if they work outdoors, such as drinking plenty of water.

But unions say this is not enough.

"No one should have to work in unsafe conditions -- stop the job when it's too hot."

Britain's Trades Union Congress said it wants "to see a change in the law" that sets 30 degrees Celsius as the "maximum temperature" when work should stop.

Spain's largest union, the CCOO, said other measures are needed to reduce the risk to workers from scorching temperatures.

It proposes the introduction of extended breaks for workers who are the most exposed to the heat, and training sessions for employers.

The union also wants employers to identify all posts which are most exposed to high temperatures.

"At present, wide swathes of workers suffer inaction on the part of employers while authorities tend to continue to turn a blind eye regarding extreme exposure during heatwaves," the report added.
BSS