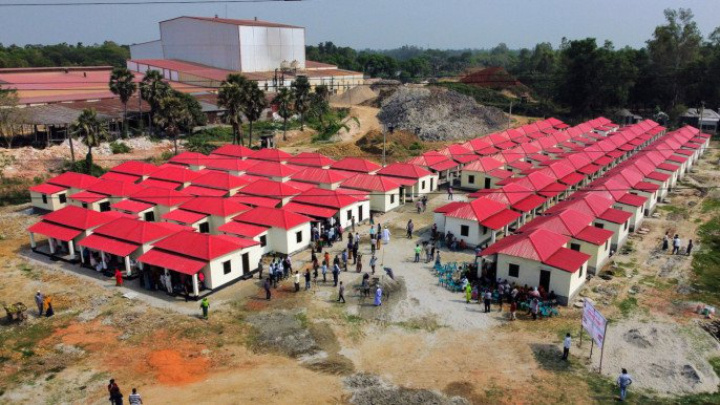 Panchagarh and Magura on Thursday were officially declared as the country’s first two districts having no landless and homeless people in a landmark achievement under Prime Minister Sheikh Hasina’s home-to-everyone Ashrayan project.

The premier made the announcement while distributing of 26,229 houses among the landless families across the country joining virtually from her official residence Ganabhaban.

In northern Panchagarh, the government found 4,850 landless-and-homeless people and constructed abodes for all of them, said Md Jahirul Islam, the district’s deputy commissioner.

In western Magura district houses have been built for 678 families, official sources said.

Both the districts are agro-based. Bangladesh has a total of 64 districts.

A total of 52 upazilas of different districts, including all the nine upazilas of Panchagarh and Magura, were also announced as having no landless and homeless families as part of the government’s commitment made on the occasion of the Mujib Year to ensure shelter for all the homeless in the country.

A total of 19,780 landless families were rehabilitated in these 52 upazilas, officials involved with the project said.

They said if anyone is found landless in the two districts and 52 upazilas, the person will immediately be given a house with land.

The local administration has already been given an order in this regard.

Some 67,800 houses are being provided among landless and homeless families in the third phase of Ashrayan-2, a project of the PMO.

Earlier, 117,329 semi-pucca houses along with two decimal lands were distributed among the homeless people in the country in the first two phases on January 23, 2021 and June 20, 2021 on the occasion of the Mujib Year marking the birth centenary of Father of the Nation Bangabandhu Sheikh Mujibur Rahman.

The government recovered some 5,512 acres of khas lands to construct houses for homeless people throughout the country and approximate market value of these lands is Tk 2,967 crore.

Besides, the government procured 191.79 acres of lands at cost of Tk 134 crore for construction of houses under the Ashrayan-2 project. And 8,462 landless families have so far been rehabilitated on the procured lands.

The government will continue implementing the Ashraya-2 project despite the global economic crisis as the housing scheme is contributing to make the rural economy vibrant amid the crisis, said the officials.