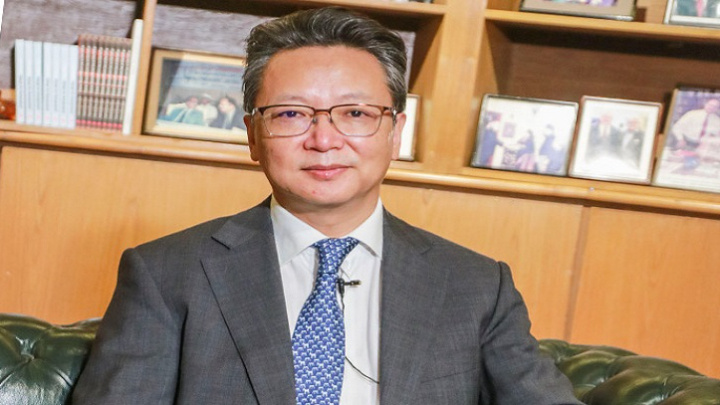 Chinese Ambassador to Bangladesh Li Jiming has shared his views and thoughts on the Padma Multipurpose Bridge.

He gave a speech in front of reporters from 12 Bangladeshi news agencies and television channels yesterday (June 19, 2022), according to a Facebook post on the Chinese embassy's verified page.

The event was held upon request of the Prime Minister's Office, the post added.

It is a pleasure for me to share my views and thoughts about the Padma Multipurpose Bridge with you, the "dream bridge" of Bangladesh. As the inauguration of the bridge draws closer, I would like to extend my warmest congratulations to the people and government of Bangladesh for this outstanding achievement! Under the leadership of Prime Minister Sheikh Hasina, the bridge has grown from a vision out of reach to a solid reality. Today, nobody will ever doubt that "Bangladesh can do it". The glory and pride of building the bridge go to the people of Bangladesh.

As Ambassador of China to Bangladesh, I feel particularly proud of and connected to the bridge, not only because it is built by a Chinese company, but also because it is a milestone of China-Bangladesh cooperation. In fact, whenever President Xi Jinping mentions Bangladesh, he will mention the Padma Bridge. News related to the bridge has also been covered by various TV channels in China. I believe that after the bridge is open to traffic, it will benefit the people of Bangladesh, it will contribute to the connectivity of South Asia, and it will serve as an everlasting bond of brotherhood between China and Bangladesh.

Whenever I think of the bridge, 3 words come to my mind: courage, determination and prosperity.

The Padma Bridge is a symbol of courage. Back in the days when the government of Bangladesh was conceiving the idea of the bridge, there were some complications regarding finance, technical viability and legitimacy of the plan. Some partners from abroad didn't believe such a plan could ever materialize. Nevertheless, Prime Minister Sheikh steeled herself for all the doubts, pressures and allegations, and decided to build the bridge with Bangladesh's own finance, which required tremendous courage and a strong sense of political responsibility.

In fact, at the very beginning, it wasn't easy for the Chinese company to decide whether or not to submit the tender either. There were strong competitions from France, South Korea and Singapore; the natural environment for the construction was tough and unfamiliar; the preliminary design wasn't fully completed, and most importantly, the Padma bridge is so far the largest bridge Chinese companies had ever built outside China. So I think accepting the challenge was also a courageous step taken by the Chinese side.

First of all, with only a preliminary design in hand, the engineers of the project had to overcome the "unforeseeable physical conditions", figure out the actual parameters in the river and then complete and modify the design, which took almost 2 years.

Second, the project involves 13 technologies which have never been used in the world, so the whole project was full of experiments that nobody had ever done before. In China, we have a saying: cross the river by feeling the stones. I think this phrase applies well in this context, both literally and figuratively.

Third, the unique hydrographic features of the Padma River have posed the most daunting challenge. The sand and soft clay under the river couldn't provide enough support to the pillars, so the steel piles had to be driven 120 meters deep into the river bed. On average, it required 20 to 30 thousand blows to drive one pile into position. Five state-of-the-art hydraulic pile hammers, including the largest one in the world, were deployed, and 3 of them were broken due to heavy workloads.

Fourth, the COVID-19 pandemic put everything on pause, yet the project managed to secure the line of logistics, provide close-loop accommodation to around 3000 engineers and workers, registered zero infection, and keep the construction work as less interrupted as possible.

The Padma Bridge is a symbol of prosperity. Before the bridge was built, it usually took hours to cross the mighty Padma River, while now it only takes ten minutes. The bridge will connect the northeastern and southwestern parts of Bangladesh, promoting the exchange of goods, labor, capital and services within the whole country. Statistics show that the bridge, once open to traffic, can push the GDP growth rate of Bangladesh up for 1.5%. It is estimated that more than 80 million people, which account for half of Bangladesh's population, will benefit from the bridge. Moreover, it serves as the missing link of the Trans Asian Railway and Asian Highway Network, and will become an integral part of BCIM. With the bridge in use, a more integrated Bangladesh will surely contribute to a more integrated and prosperous South Asia and beyond.

More importantly, since the beginning of the project, more than 50 thousand new jobs have been created. Through the project, a huge amount of local workers have become skilled labors. Many of them brought their whole families to the project site, making contributions in one way or another. The nearby towns have become more prosperous ones thanks to the bridge construction. In fact, a bridge like that won't merely connect two pieces of land; it will also connect our two peoples by heart, leading the way to common prosperity and share future.