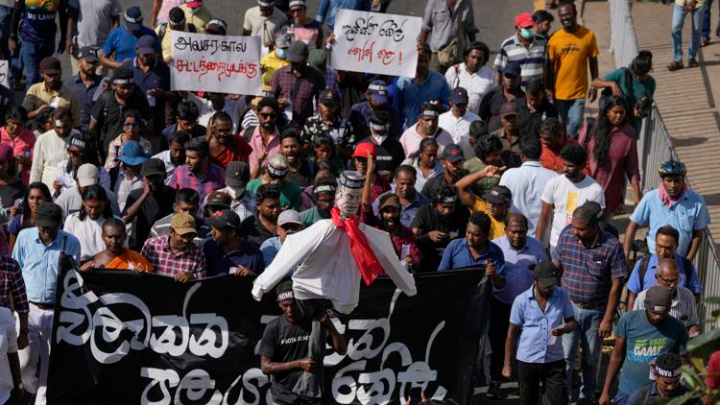 Sri Lanka's Parliament will vote by secret ballot Wednesday for a new president to lead the country out of the deep political, economic and humanitarian crisis that toppled the previous leader and has left simmering tensions in the island nation.

Prime Minister and Acting President Ranil Wickremesinghe, who has been the face of the government's handling of the economic crisis, will face a hefty challenge after late support swelled for his main rival.

The winner will serve the remainder of Gotabaya Rajapaksa's term that ends in 2024. Rajapaksa fled the country and resigned by email last week after protesters furious over the country's economic collapse stormed his official residence and took over key state buildings.

The economic crisis has left Sri Lanka's 22 million people struggling with shortages of essentials including medicine, fuel and food while the government negotiates a bailout with the International Monetary Fund. And the resulting political crisis has left worries about whether a new government will be enough to fix the economy and placate a public furious at its politicians' failures.

Wickremesinghe, 73, has wide experience in diplomatic and international affairs and has been leading the crucial IMF talks. Serving in a double role as the finance minister, he has delivered weekly addresses in Parliament cautioning that the path out of the crisis would be difficult, while also pledging to overhaul a government that increasingly has concentrated power under the presidency.

Wickremesinghe is deeply unpopular among the general public, which sees him as a holdover from the Rajapaksa government that led the country into economic catastrophe.

Only a few lawmakers have publicly said they would vote for Wickremesinghe given the hostility against him. Dozens of lawmakers loyal to Rajapaksa whose homes were burned down by protesters in May are said to be backing Wickremesinghe on the assurance that he will severely punish the perpetrators and maintain law and order.

He had looked to be leading contender during a deadlock in discussions for an alliance between Alahapperuma and opposition leader Sajith Premadasa over who should be the presidential candidate. But support grew quickly for Alahapperuma after Premadasa withdrew and threw his support to him.

Some expected Wickremesinghe supporters within the ruling coalition switched to him, and parties that had not decided their vote said they backed Alahapperuma. A main ethnic Tamil party with 10 lawmakers also decided it will vote for Alahapperuma.

If Wickremesinghe loses, he most likely will also lose his job as prime minister because the new president has the discretion to appoint a new prime minister. Premadasa is likely to be appointed prime minister if Alahapperuma wins the presidency.

Wickremesinghe is a six-time prime minister making his third attempt at the highest office after losing presidential elections in 1999 and 2005.

Opponents of his candidacy fear he represents an extension of the Rajapaksa rule and a potential comeback for a beleaguered political dynasty.

Students and political activists held small protests Tuesday demanding Wickremesinghe step down before they force him to. Some intimidating posts circulating on social media warned lawmakers against returning to their constituencies if they vote for Wickremesinghe.

Alahapperuma, 63, is viewed as a populist, with good public relations and communications skills. Even though he is a former government spokesman and has served in various posts including minister of information and mass media, minister of sports and minister of power under previous governments he previously was not considered for top leadership posts.

The vote starts at 10 a.m. with the secret ballot of the 225 members of Parliament presided over by the secretary general. The votes will be counted and announced immediately.