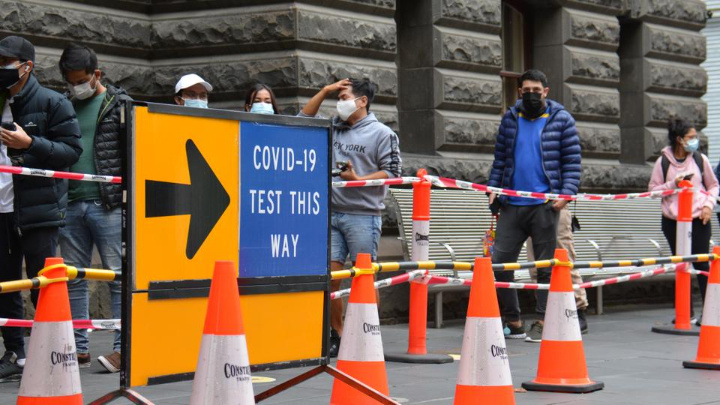 Australians admitted to hospitals from Covid-19 neared record levels on Wednesday as authorities urged businesses to let staff work from home and recommended people wear masks indoors and get booster shots urgently amid a major outbreak.

Australia is in the grip of a third Omicron wave driven by the highly transmissible new subvariants, BA.4 and BA.5, with more than 300,000 cases recorded over the past seven days, even as authorities flagged the actual numbers could be double. Tuesday’s 50,000 cases were the highest in two months.

“We need to do some things differently at least for a short period of time,” Australia’s Chief Medical Officer Paul Kelly told ABC Radio on Wednesday, as he predicted the number of people ending up in hospitals will soon hit an all-time high.

“We know that working from home is a very key component of stopping what we call macro spreading.”

About 5,300 Australians are currently in hospital with Covid-19, not far off the record 5,390 recorded in January during the BA.1 outbreak, official data showed. Numbers in the states of Queensland, Tasmania and Western Australia are already at their highest since the pandemic began.

But Kelly said he had not recommended the reintroduction of mask mandates or any other restrictions.

Last week, Australia reinstated support payments for casual workers who have to quarantine due to Covid-19 after more workers began calling in sick. Several frontline health workers are also sick or in isolation, further straining the health system.

Authorities have also warned of a lag in people taking their booster shots worsening the health crisis.

So far, 95% of people above 16 have had two doses, helping keep Australia’s total Covid-19 cases just under 9 million and deaths at 10,845, far lower than many countries. But only about 71% have received three or more doses.