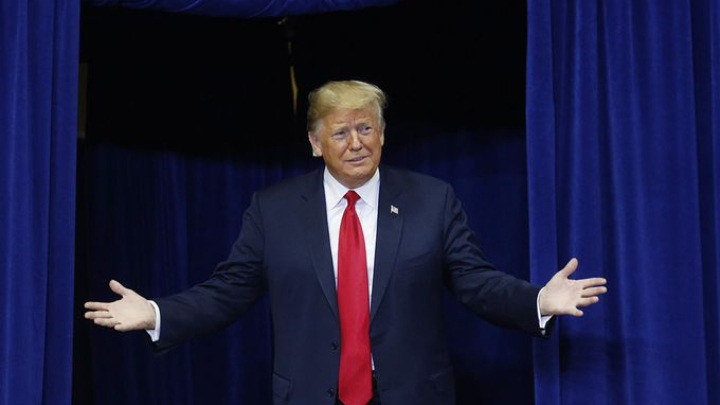 Two New York state residents were charged in a $27 million fraud in which they allegedly promised foreign nationals visas, big returns on investments and access to powerful politicians like then-President Donald Trump.

Sherry Xue Li and Lianbo “Mike” Wang, of Oyster Bay, were arrested on Monday and charged with wire fraud conspiracy and money-laundering conspiracy, while Li also was charged with conspiring to defraud the US by obstructing the administration of federal campaign finance laws.

US Attorney Breon Peace in Brooklyn said the two, both naturalized US citizens, enticed their victims to invest in a series of fake businesses, including a sham real estate investment, while making illegal donations to campaigns.

“We allege Li and Wang promised investors green cards, access to political figures, and dividends on their money,” Peace said in a statement. “Tens of millions of dollars came in from investors and straw donors, who expected their money would bear fruit. However, only one promise came to fruition, the access to political power. Foreign money pollutes our immigration and democratic processes, and we must do all we can to protect them.”

Li, Wang and their foreign national guests attended a June 28, 2017, fund raiser and posed for photographs with Trump, according to the criminal complaint. A photo Li took with Trump and his wife Melania during that event was included in the 52-page criminal complaint. The two defendants charged 12 foreign nationals $93,000 each for admission to the fund raiser and used that money to make $600,000 in unlawful political campaign contributions to the committee that hosted the event, the US claims.

The government alleges that the defendants hooked many of their victims by assuring them that a $500,000 investment would get them lawful permanent residence in the US through a special visa program. The pair raised about $16.5 million that way, as well as about $11 million from a phantom initial public offering of stock, according to prosecutors.

Li and Wang were both ordered held without bail Monday after prosecutor Josh Hafetz called both “significant” flight risks who could flee to China which doesn’t extradite to the US. Hafetz also said Li faces between 210 to 262 months in prison if convicted, which “alone is a significant reason for Ms. Li not to return to court,” he said.

When US Magistrate Judge Ramon Reyes asked Wang if understood the charges against him, the defendant sighed and answered “I didn’t do these things.” His lawyer, James Roth, said he would try to present a bail package at a later date.

Li’s lawyer Nora Hirozawa asked that her client be released on $500,000 bond, proposing that she wouldn’t flee to China because her 15-year-old son and elderly father live with her at the Long Island home.

But Hafetz countered that neither Li’s father and her domestic partner were “inappropriate suretors.” Li’s father was “paid tens of thousands of dollars on a weekly and monthly basis” from Li’s fraud, Hafetz said. Meanwhile, Hafetz said Li’s partner had a prior conviction for securities fraud.

“I do find that Ms. Li is a serious risk of flight and the package presented is insufficient,” Reyes said.

Neither Roth nor Hirozawa returned emails seeking comment about the charges.

Prosecutors also said Li’s home couldn’t be used as collateral to secure a bond because some of the proceeds earned in the alleged fraud was used to pay the mortgage.