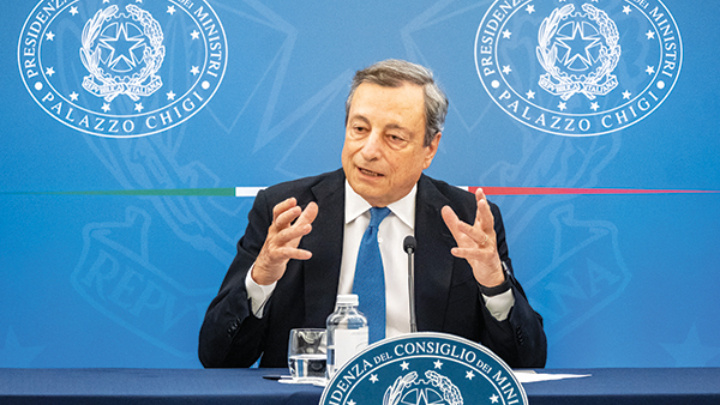 Rome: Italy’s political parties are readying for possible snap elections, even as some of them redouble efforts to convince Prime Minister Mario Draghi to rethink his determination to resign.

While talks to patch up the current majority, or form a new one, continue, Italy’s political groupings are making preparations for a potential vote, several party and government officials said, asking not to be named discussing confidential deliberations. Elections could be held on Sept. 25, according to Democrat Leader Enrico Letta, who is among those trying to salvage Draghi’s government.

Draghi blamed a breach of trust with his broad but fractious coalition when he offered to resign on Thursday in a decision that convulsed Italian markets by raising the specter of fresh political turmoil. While the former central banker so far appears unmoved by efforts to get him to change his mind, he’ll be in parliament on Wednesday at President Sergio Mattarella’s request to address lawmakers.

A resignation by Draghi would pitch Italy into disarray just as Europe contends with a brewing energy crisis fomented by Russia’s invasion of Ukraine.

At the same time, any fresh political turmoil would come at a complex juncture for the euro area, amid growing concerns about looming recession, even though the Italian economy has been faring better than its peers. Early elections would also hamper deliberations over Italy’s 2023 budget, a process that usually dominates parliamentary proceedings during the autumn.

Efforts to convince Draghi to stay on must take account of the terms that he himself set before Five Star leader Giuseppe Conte sparked the current crisis by boycotting a confidence vote. Draghi has made clear he won’t lead a new government that doesn’t include Five Star.

The center-right bloc is the grouping that could benefit most if a vote ends up getting called for autumn. It includes Giorgia Meloni’s Brother of Italy party, which currently tops the polls and is the only major party not backing Draghi, as well as Matteo Salvini’s League.

Antonio Tajani, a former European Parliament president who leads Silvio Berlusconi’s Forza Italia, on Saturday appeared to implicitly back early elections by urging Draghi to stay on in power without Five Star. That’s something the former European Central Bank president has been clear he won’t do.

Conte’s Five Star appears divided between those who want to patch up the rift with Draghi and those who want a full break with the government in an attempt to revive the movement’s moribund electoral fortunes.

Meanwhile, Enrico Letta’s Democrats and other minor centrist parties are still betting Draghi can be prevailed upon to stay on. Former Premier Matteo Renzi said in an interview published by Il Messagero newspaper today that he was working “day and night to form a new government led by Draghi.”

“With a war, inflation and the European Central Bank’s monetary tightening, the party that leaves the government would impose a huge burden on the country,” she said. “Draghi won’t leave in the end as he would end up being on the wrong side.”
Hindustan Times