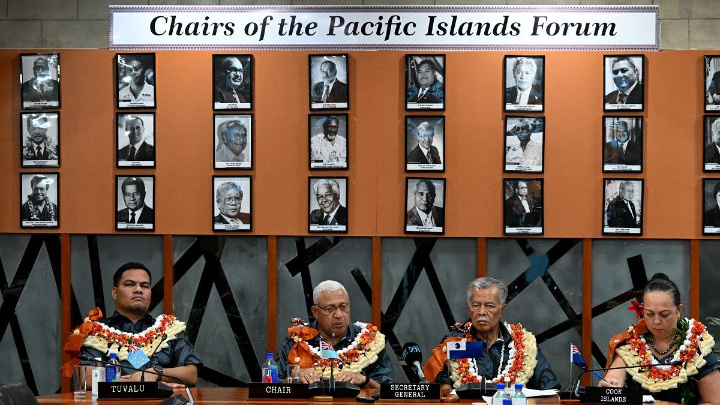 Climate-threatened Pacific islands called on Monday for the International Court of Justice to rule on countries' legal duties to stop climate change, a move designed to ratchet up pressure on polluting nations.

In a statement released after a summit in Fiji last week, Pacific leaders issued a joint call for the Hague-based court to make clear states' obligations "to protect the rights of present and future generations against the adverse impacts of climate change".

The islands -- many low-lying and already buffeted by climate change -- hope the move will introduce a heightened level of legal jeopardy for high carbon-emitting countries and spur action.

Leaders also declared the region was in a climate emergency that posed an "existential" threat.

The plan will need the backing of a majority at the United Nations General Assembly in September to be put to the ICJ.

The initiative began in a classroom at the University of the South Pacific in 2019. About 27 law students wrote to Pacific leaders asking them to take up the campaign -- and Vanuatu answered the call.

Fijian university student Vishal Prasad, 26, was one of those involved.

He told AFP during the Suva summit last week that even a non-binding "advisory opinion" from the International Court of Justice would have "wide-reaching impacts".

Prasad said he hoped the court weighing in would put polluters on notice.

For young people in the Pacific, "the existential threat, the reality" of climate change "is quite scary", he said.

"We are already seeing impacts on a daily basis. We are seeing the onset of cyclones," said Prasad. "We are seeing communities being relocated."

Tuvaluan Foreign Minister Simon Kofe told AFP that he would like to see Vanuatu's campaign supported as it was "consistent with our efforts to protect our people that are impacted by climate change".

Australia is one of the world's largest coal and gas exporters.

"I've been clear and consistent in our ask for more ambitious climate commitments," said Fijian Prime Minister Frank Bainimarama following the summit, which wrapped up on Thursday.

"We need to end our fossil fuel addiction, including coal. That is our ask of Australia, New Zealand" and all high emitting countries, he added.

Greenpeace welcomed Australia's support for the ICJ to rule on climate change.

"Australia must not only champion the journey towards climate justice through the campaign for an ICJ advisory opinion, but also pursue more ambitious climate action by committing to no new coal and gas projects."
BSS