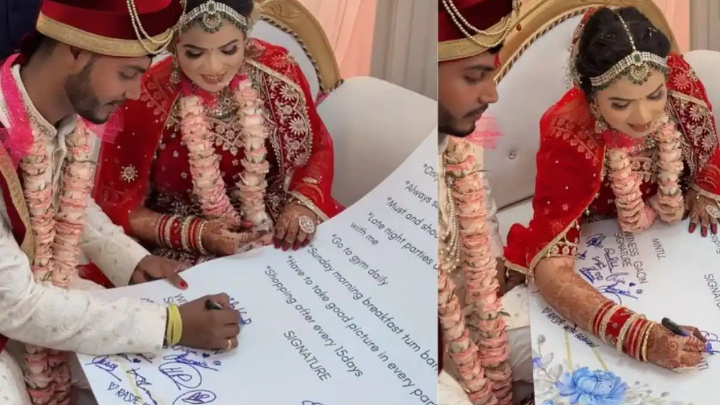 An Indian couple has signed an agreement that says “one pizza a month” in their wedding ceremony.

However, a video of the couple signing the "contract" during their wedding has made news and gone popular on social media due to its unusual nature, reports BBC.

The 16-second video of the bride and groom signing the piece of paper has 45 million views since it was posted on Instagram on June 22, a day after the wedding.

The advise is directed at Shanti Prasad, a 24-year-old bride described by friends as a "pizza fanatic" who married her college boyfriend Mintu Rai, 25, in a traditional ceremony in Guwahati, the capital of the North-Eastern state of Assam.

The pair met five years ago while they were in the same commerce class and ended up in the same WhatsApp group.

"We skipped our final lesson of the day and headed to a neighboring pizza joint. I knew I had to take her out for pizza because she was often talking about it " said Mintu, who operates a city electrical goods business.

Shanti added: "Pizza is one of my favorite foods. On dates, I would always suggest that we go out to have pizza."

She also claimed that they have already had two pizzas twice since the wedding in two weeks.