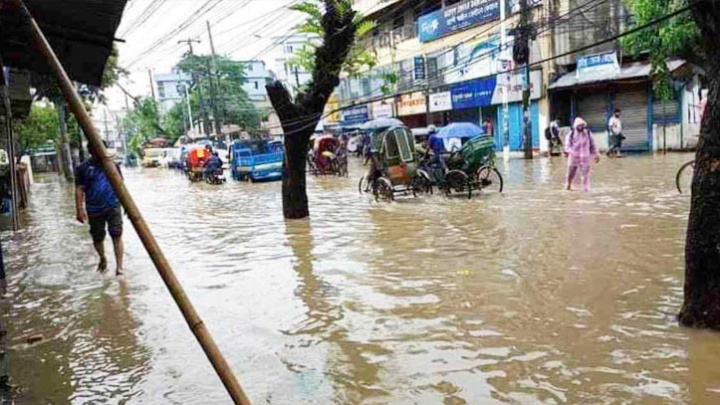 After a weeklong heat wave swept over Sylhet, only 1.5 hours of rain on Saturday left several parts of the district with a knee-deep level of waterlogging.

Due to the lack of a proper drainage system in Sylhet city, the rainwater entered houses in many places including Bhatalia Nayapara, Shibganj, Ambarkhana, Pathantula and Bagbari.

Panna Lal Roy, a resident of Bhatalia Nayapara reported that his house was flooded knee-deep since midnight.

“Many pieces of equipment in our house, including our refrigerator, were destroyed by the water,” he said.

Meanwhile, vehicles were forced to operate on the waterlogged roads, causing many to break down.

The rainwater on the streets started to recede after the rain stopped at around 12:30am on Sunday.

Sylhet Meteorological Office predicted that the mild to moderate heatwave over Rangpur and Rajshahi divisions along with Sylhet, Tangail, and Chuadanga districts may continue for two more days.

However, according to the 24-hour forecast, some places in Sylhet, Rangpur, Khulna, Barisal, and Chittagong divisions and one or two places in Rajshahi, and Mymensingh divisions may experience light to moderate rains and thundershowers with temporary gusty winds.

Sylhet experienced the hottest day in the month of July in 66 years on Thursday, with a record temperature of 38.9°C.

Last week’s highest temperature in Sylhet was recorded at 35.3°C on July 10.