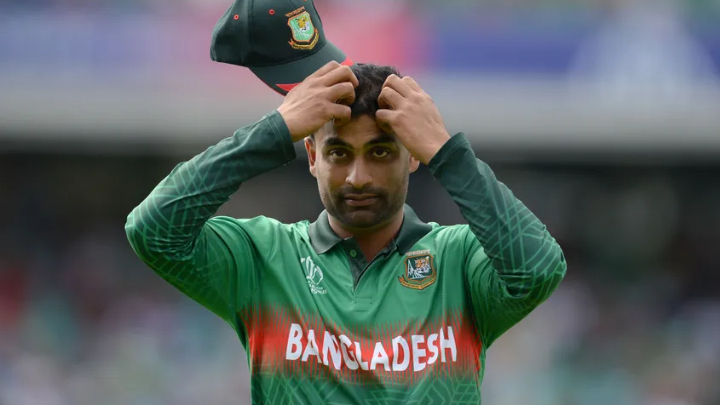 Bangladesh captain Tamim Iqbal came up with a clue that the four senior players, including him may retire from the ODI format after the 2023 Men's 50-over World Cup in India.

Shakib Al Hasan, Mushfiqur Rahim and Mahmudullah Riyad are the other three players, who alongside Tamim built a 'fabulous four' club, which made Bangladesh a top team in ODI format.

Tamim's comment came after the second ODI against West Indies, which Bangladesh won by nine wickets at Providence Stadium in Guyana on Wednesday.

"2023 World Cup probably will be one of the biggest events for all of us, especially four of us who most likely end there and we have to make the bets possible combination and best possible team going forward," Tamim said.

Bangladesh won the rain-curtailed first match by six wickets and having won the second ODI, they not only sealed the three-match ODI series but also extended their winning streak to West Indies to 10 straight matches.

Also it is Bangladesh's fifth consecutive bilateral ODI series win - having beaten Sri Lanka, Zimbabwe, Afghanistan and South Africa before this series win. The series victory is also Bangladesh fourth straight against the Caribbean side.

The series win in their favoured format came as a soothing pleasure for the side after being whitewashed in two-match Test series and losing the three- match T20 International series by 2-0 (first game ended in a no result due to rain).

"At the beginning of the series I told this in one format we are really proud and played really well. And we lost Test and T20 series, dressing room wasn't the happiest. Everyone wanted to win. This is really good, there are lot of areas we need to tick boxes," Tamim remarked.

"Even in the Test matches whatever runs I got I was batting well, what wrong I did was I didn't make big. I take it very simple, I just go with the rhythm and see what the situation is, for now it's going well for me."

Tamim showered left-arm spinner Nasum Ahmed with enormous praise, saying that he bowled intelligently in a condition suited his skill. Nasum took 3-19 in 10 overs t be adjudged man of the match.

"Nasum is brilliant. When Shakib is here, he doesn't get a game, I think he bowled unbelievably, used the conditions very well."
BSS