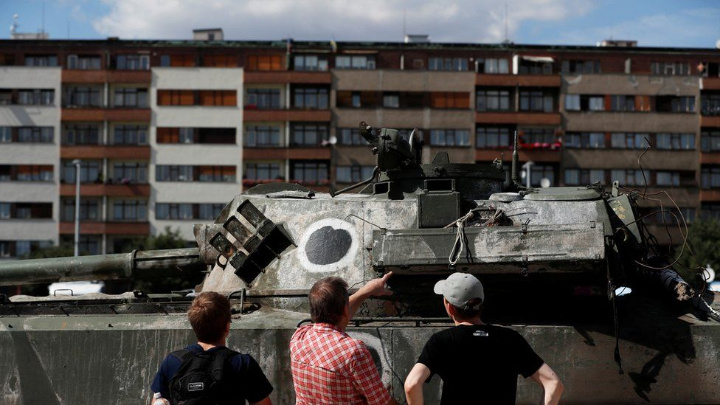 An exhibition of Russian military equipment destroyed by Ukrainian forces in the ongoing war is being held Czech capital, Prague. The captured war trophies that were put on display include a damaged T-90 tank, Buk air defence system, Khosta self-propelled mortar, Msta howitzer, and casings and fragments from rockets and missiles. The destroyed armour from the battlefield was displayed on Letna Plain, a large open space a short distance from Prague Castle.

Ukrainian embassy spokesperson Tetiana Okopna told Czech Television that they hope to show once again the “horrors of war that Russia's aggression has brought to Ukraine”, reported BBC.

In one of the photographs published by Radio Free Europe/Radio Liberty, a Ukrainian man can be seen crying against the hull of a Khosta self-propelled mortar.

"Czechs have bitter memories of russian tanks in Prague, 1968. Now they can see them from a different angle. Today an exhibition of rus weapons destroyed by Ukraine warriors opens in the capital of Czech.Ukraine is a shield in the East of Europe," the Ukraine defence ministry tweeted. "Give us the tools and we will end the war!"

Meanwhile, Germany and the Czech Republic signed a joint declaration pledging to overcome dependency on Russian fossil fuel dependency and to accelerate the transition to low carbon energy.

"We are going to finalise the agreement on solidarity measures to safeguard the security of gas supply between our countries prior to the start of the upcoming winter season," the declaration read.
Hindustan times