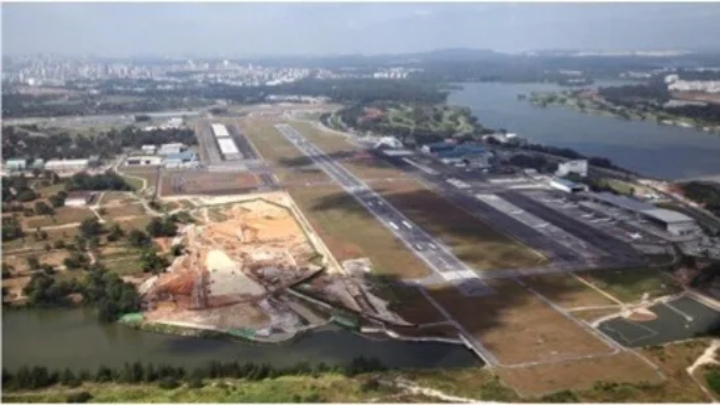 Just 20 minutes north-west of Singapore’s Changi Airport -- regularly voted the world’s best -- is Seletar Airport, the city-state’s second, and far well less known, airfield. It’s predominantly where the super rich land in their private jets. It’s also where the future of aviation could be taking off.

The neighborhood, more known for its laid-back cafes in restored British-era colonial buildings and sleepy fishing villages, is positioning itself as a hub for flying taxis. Singapore has already signed two agreements with advanced air mobility startups Skyports Ltd. and Volocopter GmbH that may convert the aging aerodrome into a vertiport, or an airport where the aerial devices take off and land vertically, Jetsons-style.

It isn’t some way off dream, either. Plans for flying taxis to be operational at Seletar are pretty immediate -- as soon as 2024 -- and the airport, or vertiport, could serve as a global model for what the future of mobility may look like.

Recent interest in so-called eVTOLs (electric vertical take-off and landing vehicles) has been immense. Electric cabs stole the limelight at this year’s Singapore Air Show in February with Malaysian tycoon Tony Fernandes of AirAsia fame placing an order to rent at least 100 of them from Vertical Aerospace Ltd. Carriers including American Airlines Inc. and Virgin Atlantic Airways Ltd. have also ordered scores of eVTOLs.

“Singapore is, and continues to strive to be, the world leader in mobility, and this development is another brick in that wall,” said Sunny Xi, a principal at consultancy Oliver Wyman’s transportation and services practice. “This is more than simply solving traffic on roads. Singapore has all the right ingredients to test, learn and scale both the mobility adoption and the business to then export it across the world.”

But flying taxis -- until recently the stuff of science fiction -- have one big and crucial hurdle to clear. Not one has been approved by regulators anywhere to actually take to the skies with passengers onboard. Authorities can take years to approve new technology and it’s only recently that flying taxis have a taken the giant leap from being a concept to a reality. Regulators are now examining the safety of such vehicles before green lighting them for commercial operations.

Companies like Volocopter say it’s just a matter of time, and Asia will play a large role in eVTOL adoption.

“In Asia, you have a high concentration of mega cities that you don’t have in any other region,” Christian Bauer, Volocopter’s chief commercial officer, said in an interview. “This new industry is innovative, it’s good for inhabitants, for tourists, and also for cross-border connections to relieve the pain of congestion.”

Volocopter, which predicts S$4.2 billion ($3 billion) of cumulative economic benefits to Singapore and as many as 1,300 local jobs by 2030 from the industry, is showcasing its aircraft in the city-state later this month to increase public awareness. It’s also talked up the “political benefits” including reduced car ownership and the ability of Singapore to position itself as a torchbearer for the rest of Asia.

Fares for passengers are expected to start at about 40% of the cost of a helicopter, according to Bauer. That could drop to around the price of a premium taxi within five to six years, he said.

“This makes it interesting for anyone who can afford a taxi to take a Volocopter instead,” Bauer said, adding that the company’s service will be “very silent compared to a helicopter. You will not hear it at all.”

For all the behind-the-scenes work, the burgeoning revolution underway at Seletar isn’t visible yet.

On a recent visit, the airfield was littered with private and small trainer planes, with a few bigger jets in hangars undergoing repairs. Patrons at an aviation-themed bistro overlooking the runway were mostly expats or locals with jobs at nearby plane-maintenance companies. Inside the terminal, staff were busy guiding a handful of passengers onto a flight to Subang Jaya in Malaysia -- one of the only two commercial services operating from the airport.

Singapore’s Jurong Town Corporation , commonly known at JTC and a primary state-run developer of real estate, is bullish on Seletar’s scope. The broader area surrounding the airstrip, called Seletar Aerospace Park, is the centerpiece of Singapore’s aerospace industry cluster and home to around 60 companies spanning businesses from engine makers, repairs, research and training.

“The future of urban air mobility is exciting and presents far-reaching possibilities for Seletar Aerospace Park,” Lim Ai Ting, JTC’s director of aerospace and marine cluster, said. “We’re currently in discussions with various parties on new partnerships. This will add to the park’s vibrancy and also benefit the aerospace industry ecosystem.”

With about 82,500 passenger eVTOLs expected to be operational in Asia Pacific by 2050, the region will account for around half the global market, according to a study by Rolls-Royce Holdings Plc and consultancy Roland Berger released earlier this year. The flying devices could be used as airport shuttles, for tourist flights or inter-city travel, flying as far as 250 kilometers (155 miles) on a single charge, according to the study.

“With its high-rise and high-density landscape, and highly efficient domestic transport systems, the vision in Singapore is focused first on tourist flights, and ultimately, regional connectivity,” said Yun Yuan Tay, Skyports’ head of APAC. Seletar, with its integrated cluster of aerospace-related facilities, is “the perfect setting for the holistic development of an industry as new as advanced air mobility,” he said.

A unit of Kenya Airways Plc agreed last month to buy as many as 40 flying taxis starting in 2026 from EVE UAM, part of US-headquartered Eve Holding Inc. And England’s Coventry, once known as Britain’s motor city, is gearing up to host what’s being billed as the first-ever fully functional hub for flying taxis this spring. The site, on a car parking lot at a busy junction across the road from Coventry’s main railway station, is being developed by Urban-Air Port Ltd., a London-based startup that competes with Skyports.

“The good thing is, a couple of years back, we were approaching cities,” said Volocopter’s Bauer. “Now cities are approaching Volocopter because they see the demand, they see this revolutionary change, and they want to be there. Singapore is high on the list.”

Outside of regulatory approval, another hurdle is range, with eVTOLs’ flying time relatively limited. Potential electrification of popular passenger planes like Airbus SE’s A320s series or Boeing Co.’s 737 family has been largely ruled out due to the immense weight of the batteries that would be required to fly hundreds of miles.

The fact the aerial devices are electric isn’t going to put much of a dent in aviation’s huge carbon footprint, either.

About 80% of the industry’s carbon emissions come from flights longer than 1,500 kilometers, which is why flying taxis won’t be a solution in the near term, the International Air Transport Association’s Director General Willie Walsh said in May. The biggest lobby group for airlines is “conservative” about the impact the technology will have on the industry’s path to net zero, Walsh said.

Read more: Why Electric-Powered Airplanes Are Headed for Takeoff: QuickTake