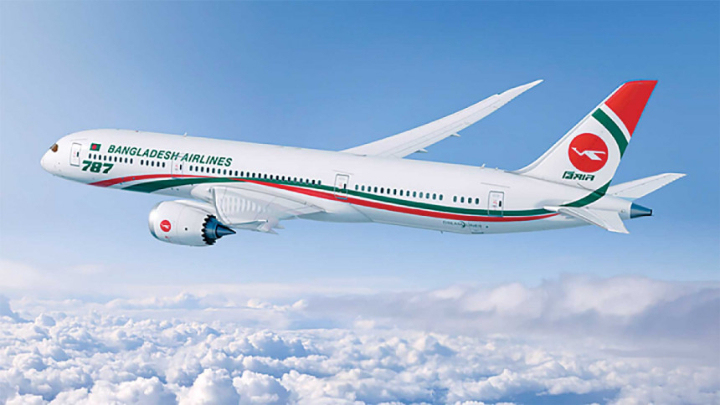 The wings of the two aircraft were damaged due to the collision between a Boeing 787 Dreamliner and a Boeing 737 aircraft.

Biman General Manager (Public Relations) Tahera Khondoker confirmed the incident and said that a team from the engineering department of Biman had visited the scene.

The Boeing 787 arrived at Hazrat Shahjalal International Airport last night after taking off from Singapore, according to sources at the airport.

Around 9 pm, the plane was taken to the hangar for routine maintenance. A Boeing 737 aircraft was already in the hangar at that time.

While attempting to enter the hanger, the Dreamliner collided with the wing of the Boeing 737. The accident caused damage to the left and right wings of the Boeing 737 and 787 respectively.

Tahera said that an investigation would reveal the accident's cause and the extent of the damage.

Earlier on June 16, a Boeing 787-8 Dreamliner of Biman collided with the boarding bridge at the HSIA.

On June 4, a trolley-dolly of US-Bangla Airlines hit a Boeing 737 aircraft of Biman at the Dhaka airport.

In mid-April, two Boeing aircraft of Biman Bangladesh were grounded following collision at the hanger of HSIA.

On February 15, a Boeing 737 aircraft of Biman was brought back from Malaysia after a windshield crack was noticed mid-flight en route to Kuala Lumpur two days earlier.

In April, a Dash-8 aircraft of Biman remained grounded for around three months due to "damaged engines caused by pilot error."

Aviation experts said, these incidents could have been avoided with careful operation of the aircraft and advanced maintenance.