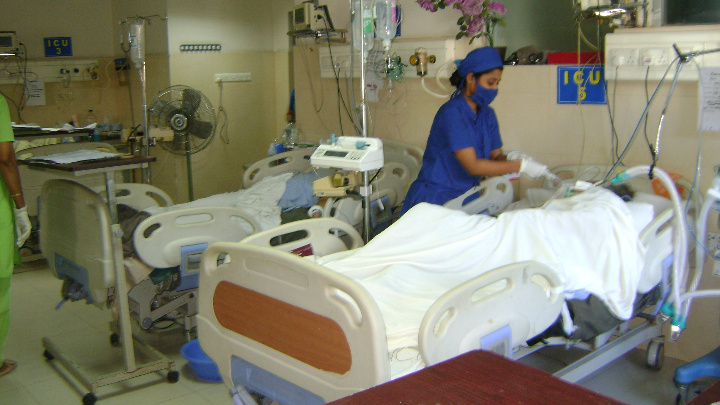 Two seventh-graders of a school in Narayanganj are undergoing treatment in the ICU of an area hospital after being thrashed by a teacher.

The incident took place at Haji Nur Uddin Ahammed High School in Rupganj upazila at around 12:30pm on Saturday.

The victims are Tanjila Akter, 14, and Samia Simi Nishi, 13.

Rupganj police station OC said the police would take legal action on the basis of their investigation.

According to the case statement, the school authorities on Saturday announced that it would close for the Eid-ul-Azha holidays in a couple of days.

Elated by the announcement, some students of the seventh grade, including Tanjila and Nishi, were playing with spangles on the school premises, which irked their teacher Jasim Uddin.

Jasim called the two teenagers to his office and started caning them when they arrived.

Seeing that they had become sick, Jasim admitted them to the local US-Bangla Medical College Hospital without informing their parents. He contacted them later, when their condition worsened.

Tanjila and Nishi were shifted to the ICU of the hospital at about 8pm that day.

Jasim was previously accused in a rape and a murder case, and he was sent to jail multiple times as well, according to locals and school sources.

But Jasim enjoyed impunity for his sycophancy, they claimed.

Students of the school declared that they would take to the streets if Jasim went unpunished.

Rupganj Upazila Nirbahi Officer Shah Nusrat Jahan said a panel had been formed to probe into the incident, before holding out the assurance that the perpetrator would be punished.