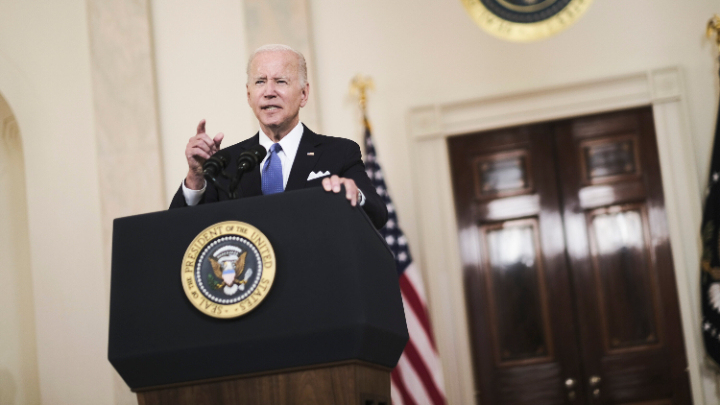 The Biden administration moved to assure women that sensitive information – including medical records related to abortion and data collected by health and period tracking apps – could be shielded from law enforcement after the Supreme Court overturned the constitutional right to an abortion.

The Department of Health and Human Services issued new guidance Wednesday telling health-care providers they are not required to - and often legally prohibited from – disclosing private health-care information related to abortion and other sexual and reproductive health care.

Separately, the White House is preparing a letter from President Joe Biden that could be sent as soon as this week asking the Federal Trade Commission to protect women’s privacy when they seek information about or disclose personal data related to reproductive health care.

The intent, according to a person familiar with the effort, is to prevent companies from collecting and selling location data from phone apps that could reveal where and when women are visiting or seeking information about abortion clinics. The letter would ask the FTC to bar unfair or deceptive practices related to the reporting, sharing, or sale of sensitive health-related information, regardless of the state.

The administration is also releasing new guidance detailing best practices for women seeking to keep private the health data they might share or abortion-related searches they might make on their mobile devices. The information explains how users can turn off location-tracing services and pick applications and search engines with privacy safeguards.

The steps come as the White House has pushed government agencies to find ways to maintain access to abortion for American women following the Supreme Court ruling, which overturned the federal right to the procedure and left the decision up to states. At least 22 states already have laws on the books that significantly restrict or fully outlaw abortion, with others likely to move quickly in that direction following the court ruling.

“How you access health care should not make you a target for discrimination,” HHS Secretary Xavier Becerra said in a statement. “HHS stands with patients and providers in protecting HIPAA privacy rights and reproductive health care information.”

The Health Insurance Portability and Accountability Act, or HIPPA, is a Clinton-era bill that limits health disclosures without a patient’s permission, including to law enforcement officials.

The moves by the federal government come as some abortion-rights activists have expressed concern that period tracking and search data collected by technology companies could be subpoenaed by state prosecutors pursuing abortion-related cases. Nearly a third of American women say they’ve used cycle tracking applications in the past, according to a 2019 survey by the Kaiser Family Foundation.

The nation’s two most popular period-tracking apps have worked to reassure users. Flo Health Inc. said their popular application would soon add an “anonymous mode” that allowed users to avoid providing their name or email address, and that they did not sell personal data. Germany-based Biowink GmbH’s Clue app said it did not sell users’ personal data and would abide by European privacy laws.

The push by the Biden administration comes as the White House has discounted other suggestions from Democratic lawmakers and abortion-rights activists as legally risky or not politically feasible.

Earlier this week, the White House said a proposal to allow doctors to practice abortions on federal property in an attempt to bypass state restrictions would leave doctors and patients at legal risk. The White House has also said suggestions to abolish the filibuster or add justices to the Supreme Court do not have the political support necessary in the closely divided US Senate.

But the administration has taken other incremental steps. On Monday, the Office of Personal Management said that federal workers could use sick leave to travel for medical appointments out of state, and would not need to provide documentation of what specific procedure they undertook. Last week, Biden said he was ordering his administration to expand access to abortion pills and asking the Justice Department to intervene should officials in states that ban abortion try to prevent people from traveling to obtain the procedure.
Hindustan Times