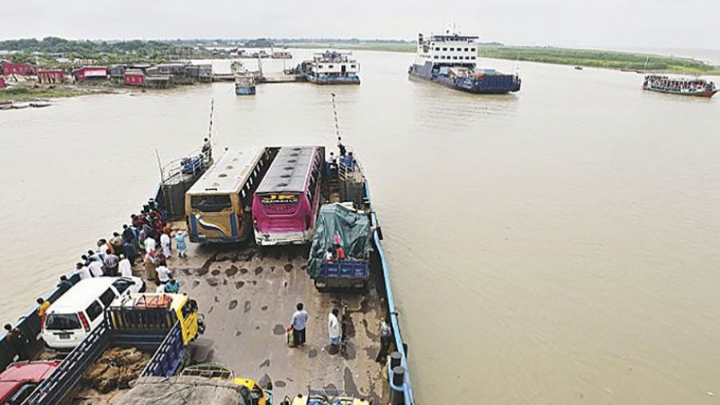 The hawkers who ply their trade on the Daulatdia-Paturia ferry route are worried about going out of business at Daulatdia ferry ghat now that the Padma Bridge is open to traffic.

The government provided a clarification prior to the opening that ferry services, at least in terms of availability and legal permits or schedules, could continue as before. But the challenge was always going to be competing with the $3.6-billion bridge as a preferred mode to cross the river.

When it comes to public demand, they simply cannot compete with the bridge in the long run.

And it now looks like their demise may come even sooner than expected.

Alongside them, hundreds of hawkers who depend on the heavy footfall of launch passengers are faced with the same fate.

During a recent visit to Daulatdia ghat, UNB learned that the shops situated along both sides of the ferry ghat are already closing. Some hawkers had covered their stalls in polythene.

The lack of ferry or launch passengers has also meant the usual bustle of the ghat is gone, and launch staffs are no longer engaged in aggressive tactics to pull customers away from competitors.

Alamin Bapari, who collects entry fees at Daulatdia ferry ghat, said they used to collect fees from 6am to 9pm each day and some 4,000-5,000 people on average would go through the ghat each day, even just prior to the inauguration of the Padma Bridge.

That number has already dropped to 1,200-1,500, which is way under even half the number of passengers they served before.

Currently, passenger buses are moving over the Padma Bridge from Faridpur and people are using the bus to cross the bridge - a long-cherished dream of many. This is the main reason behind the low turnout of passengers, said Alamin.

Nurul Anwar Milon, representative of the launch owners’ association of the ghat, said: “The number of passengers has obviously come down due to the opening of the Padma Bridge. The actual situation [the effect on their business] will be known after some days. If it prevails for long, it will be very difficult for us to meet our expenses.”

A number of physically challenged people, who collected alms in the ghat area, including one Ratan Sardar, said they are unable to get any gainful employment and hence must depend completely on alms. “We hardly earned Tk400-Tk500 in a day. Now we are worried about our income.”

Abdur Rashid, manager of MV Nupur, said a total of 34 launches of the same company were operative on the two popular routes in the country — Daulatdia-Paturia and Aricha-Nagarbari.

Of those, 20-22 were running on the Daulatdia-Paturia route, but already the number of vessels on the route has come down to 16. There are 1,300-1,400 staff members of the company and most of their salaries is paid from launch fares, he said.

Aftab Uddin, traffic inspector of the Bangladesh Inland and Water Transport Authority (BIWTA), Daulatdia ghat, said the number of launches on the route has declined due to the poor number of passengers.