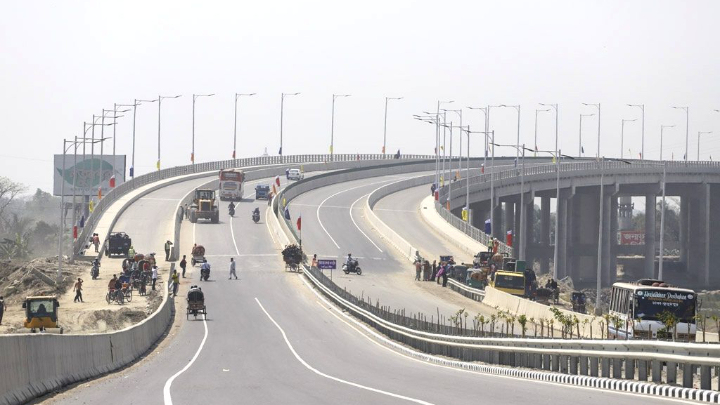 The government has fixed tolls for different vehicles for using Dhaka-Mawa-Bhanga Expressway, which will come into effect on Friday, a move that will push up transport costs.

Road Transport and Highways Division yesterday issued a circular, fixing the tolls for an interim period.

Although the circular fixed the toll for motorcycles, Roads and Highways Department (RHD) yesterday said it was considering banning the operation of bikes on the expressway.

However, the two-wheelers would be able to use service lanes of the country's first expressway, formally known as Jatir Pita Bangabandhu Sheikh Mujibur Rahman Highway.

In another development, RHD yesterday signed a contract with a joint venture firm, led by Korea Expressway Corporation (KEC), for maintenance and operation of the expressway, which includes collecting tolls and installing ATS there.

In that case, bus fares are likely to increase further. Earlier this month, BRTA refixed bus fares for 15 routes in the south-western region, adjusting for Padma Bridge's tolls, and fares for most routes were increased by around Tk 10 on average.

Earlier on June 27, the division had issued a circular, fixing Tk 10 per kilometre as the base tolls and date for starting toll collection on the expressway.

Moreover, a vehicle has to pay toll for Padma Bridge separately.

"We have already sent a proposal to ban motorbikes on the expressway," AKM Manir Hossain Pathan, chief engineer of RHD, said yesterday.

However, the two-wheelers will be allowed on service lanes, he said at a signing ceremony at RHD headquarters yesterday.

Replying to a question, he said the decision to ban motorbikes will be finalised following discussion with stakeholders.

Earlier on June 26, Bangladesh Bridge Authority banned motorbikes on Padma Bridge from 6:00am of June 27 until further notice, as thousands of bikers queuing up to cross the bridge overwhelmed the toll plaza employees, and two bikers died in a crash on the bridge.

On June 22, Cabinet Committee on Government Purchase approved the proposal to give the aforementioned joint-venture firm the responsibility of collecting tolls, among other work, on the expressway.

As per the proposal, the authorities have to pay Tk 717.49 crore for installing an "intelligence transport system" on the expressway as well as maintenance, operation and collection of tolls for the next five years.

Two partners in the agreement are S-Traffic Company Ltd of Korea and Tele Tell Communications of Bangladesh.

Sabuj Uddin said they have already developed a software for collecting tolls for the first six months. Other modern equipment would be developed within this period.

Asked why they could not engage the vendor earlier, even though the interim tolls were fixed in April last year, RHD chief engineer, said, "We did not sit idle…There could be better preparation... but our efforts should not be questioned."

Now, both the bridge and expressway authorities would collect tolls manually, which may cause huge tailbacks ahead of Eid-ul Azha.

The chief engineer asked the vendor to keep the matter in mind.

RHD officials said tolls for the expressway would be collected at two main points -- near Dhaleshwari Bridge and Bhanga. However, there would also be toll plazas at four entry and exit points at Abdullahpur, Srinagar, Puliabazar and Maligram.