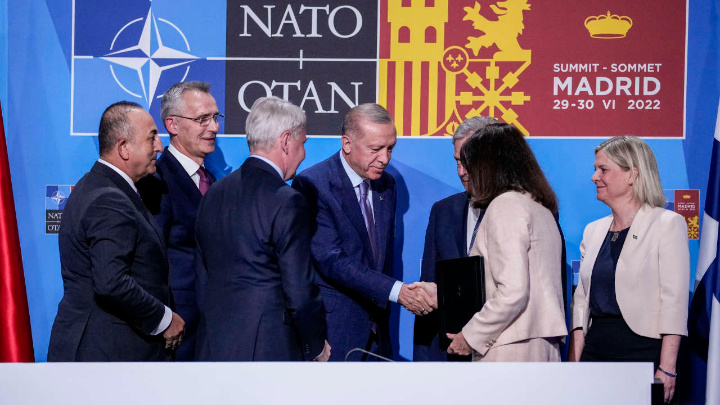 Nato leaders were set on Wednesday to invite Finland and Sweden to join after Turkey dropped objections, as the alliance looked to revamp its defences at a summit dominated by the war in Ukraine.

More than four months after Russia invaded Ukraine, upending the European security landscape, leaders gathered in Madrid for what Nato chief Jens Stoltenberg called a "historic and transformative summit" for the alliance's future.

Ukrainian President Volodymyr Zelensky is set to address the meeting via videolink to renew Kyiv's pleas for accelerated weapons deliveries from its allies.

Nato countries, which have already committed billions of dollars in military assistance to Kyiv, will agree to a "comprehensive assistance package to Ukraine, to help them uphold the right for self-defence."

"We meet in the midst of the most serious security crisis we have faced since the Second World War," Stoltenberg said."

"We'll state clearly that Russia poses a direct threat to our security."

Nato is due to launch the largest revamp of its defence and deterrence capabilities since the end of the Cold War by strengthening the forces on its eastern flank and massively ramping up the number of troops it has at high readiness.

"Russia now is an aggressor in Ukraine, Russia attacked Ukraine and Russia is a threat for Europe but not only for Europe, for all Nato," Poland President Andrzej Duda said.

"This is a very clear situation now."

Beyond Ukraine, the summit will see a revamp of Nato's strategic concept -- which outlines its main security tasks, but has not been revised since 2010 -- to mention challenges posed by China for the first time.

Finland and Sweden will be invited to join the alliance at the summit after Turkish President Recep Tayyip Erdogan on Tuesday lifted his opposition following crunch talks with the leaders of the two Nordic countries in Madrid.

The move is a blow to Russia's President Vladimir Putin, who launched his war in Ukraine saying he wanted to stop Nato expansion but is now set to see his border with the alliance more than double.

Erdogan had stubbornly refused to back the applications from the Nordic pair -- lodged in response to Russia's war on Ukraine -- despite pressure for a change of course from his Nato allies.

But Erdogan's office said it had agreed to support them as Ankara had "got what it wanted".

Ankara had accused Finland, and especially Sweden, of offering a safe haven to Kurdish militants who have been waging decades-long insurgency against the Turkish state.

US President Joe Biden congratulates Turkey, Finland and Sweden on reaching an agreement.

"As we begin this historic Nato summit in Madrid, our alliance is stronger, more united and more resolute than ever," he said in a statement.

But it will still take months for Finland and Sweden to officially join Nato, as their entry needs to be ratified by the parliaments of the 30 member states.

The summit comes as war rages across Ukraine, particularly in the eastern Donbas region where Moscow has been focusing its offensive after failing to capture Kyiv in the conflict's early days.

There was global outrage Monday after a missile strike on a shopping mall in the central city of Kremenchuk killed at least 18 people and injured dozens.

Russia claims its missile salvo was aimed at an arms depot. But AFP talked to civilians in Kremenchuk, and none of them knew of any weapons store in the neighbourhood.

"Everything burned, really everything, like a spark to a touchpaper. I heard people screaming. It was horror," witness Polina Puchintseva said.

All that was left of the mall was charred debris, chunks of blackened walls and lettering from a smashed storefront.

"Only total insane terrorists, who should have no place on Earth, can strike missiles at civilian objects," said Zelensky on his social media channels.

"Russia must be recognised as a state sponsor of terrorism. The world can and therefore must stop Russian terror," he added.

Addressing the UN Security Council Tuesday, Zelensky called for the United Nations to visit the site so they can independently assess whether the destruction was caused by a Russian missile strike.

But the Kremlin was unfazed, insisting that Ukrainian forces had to surrender to end the fighting.

"The Ukrainian side can stop everything before the end of today," Kremlin spokesman Dmitry Peskov said.

"An order for the nationalist units to lay down their arms is necessary," he said, adding Kyiv had to fulfil a list of Moscow's demands.