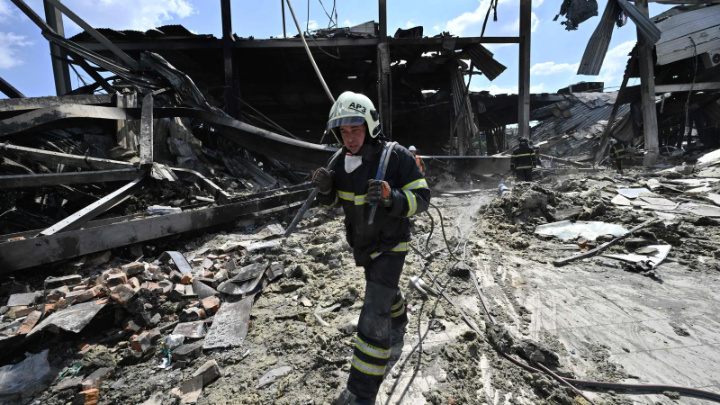 Western allies vowed on Tuesday to boost Nato’s defences and to back Ukraine to the end as Moscow demanded Kyiv’s surrender.

Allied leaders were gathered in Madrid for a Nato summit, even as Russian missiles continued to pound Ukrainian cities.

The Nato leaders faced tough talks with Turkey to unblock Sweden’s and Finland’s bids to defy Russian threats join the Atlantic alliance. But they were determined to preserve a united front in the face of Moscow’s four-month-old invasion of pro-Western Ukraine.

The reinforcements will join Nato’s eastern flank, Russia’s nervous neighbours like the Baltic states, and reflect a long-term change “in the strategic reality” elsewhere in Europe.

Before travelling to Madrid, Biden and other leaders of the G7 powers -- the world’s richest democracies -- had held a summit in the German Alps.

Germany’s Chancellor Olaf Scholz boasted afterwards that his country, a laggard in defence spending, would build “the largest conventional army within the Nato framework in Europe”.

Russia’s invasion, he said, had convinced Berlin “that we should spend more... an average of around 70 to 80 billion euros a year on defence over the next few years”.

The US treasury said the measures “strike at the heart of Russia’s ability to develop and deploy weapons and technology used for Vladimir Putin’s brutal war of aggression against Ukraine”.

Putin’s Kremlin was not fazed by the sanctions, warning that Ukraine’s forces’ only option was to lay down their arms in the face of the Russian invasion.

“The Ukrainian side can stop everything before the end of today,” Kremlin spokesman Dmitry Peskov said.

“An order for the nationalist units to lay down their arms is necessary,” he said, adding that Kyiv had to fulfil a list of Moscow’s demands.

The consequences of Russia’s four-month-old invasion were on display in the central Ukrainian city of Kremenchuk, where shaken civilians recounted Monday’s missile strike on a shopping mall.

All that was left of centre -- scene of at least 18 deaths -- was charred debris, chunks of blackened walls and lettering from a smashed store front. Russia claims its missile salvo was aimed at an arms depot - but none of the civilians who talked to AFP knew of any weapons store in the neighbourhood.

And, outside Russia, the latest carnage sparked only Ukrainian fury and western solidarity.

“Indiscriminate attacks on innocent civilians constitute a war crime,” the G7 leaders said in a statement, condemning the “abominable attack”.

Ukraine’s President Volodymyr Zelensky declared on his social media, “Only total insane terrorists, who should have no place on Earth, can strike missiles at civilian objects.”