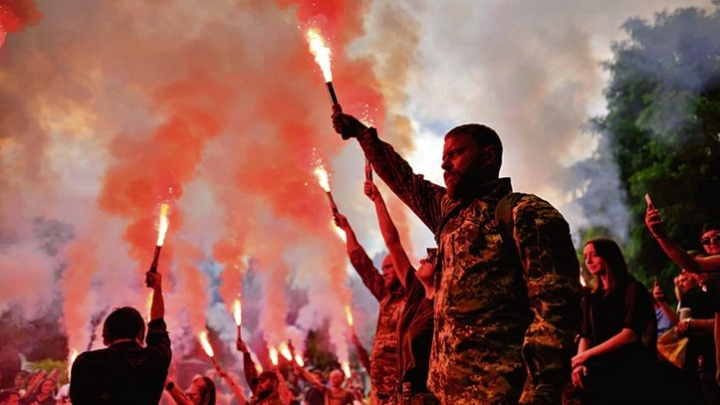 Ukrainian authorities said on Saturday that “fierce battles” with Russia raged in villages outside the eastern city of Severodonetsk, which Moscow’s forces have been trying to seize control of for weeks.

“Now the most fierce battles are near Severodonetsk. They (Russia) do not control the city entirely,” the governor of the eastern Lugansk region, Sergiy Gaiday, said on Telegram.

“In nearby villages there are very difficult fights - in Toshkivska, Zolote. They are trying to break through but failing,” he said. “Our defenders are fighting Russians in all directions. Recently, they shot down a plane and took captives.”

Gaiday also said that Lysychansk - a Ukrainian-controlled city across a river from battered Severodonetsk - is being “heavily shelled”.

The attack on towns just south of Severodonetsk was repulsed by Ukrainian forces, Gaiday said on Telegram.

Russia is sending a large number of reserve troops to Severodonetsk from other battle zones to try to gain full control of the eastern city, Gaiday said.

Ukrainian authorities reported overnight shelling of multiple locations in the eastern regions of Luhansk and Kharkiv and further west in Poltava and Dnipropetrovsk.

Five civilians were killed and 12 injured in a Ukrainian bombardment of the eastern separatist city of Donetsk, local authorities said on Saturday.

Shelling has trapped 77 miners in a coal mine in the Donetsk region of eastern Ukraine after power to the mine was cut off, Russia’s state RIA news agency reported on Saturday.

“As a result of shelling by (Ukrainian forces), power to the Zasyadko mine in Donetsk was cut off, 77 miners remain underground,” RIA said, citing the Russian-backed separatist region’s territorial defence.

Ukrainian President Volodymyr Zelensky visited the war-damaged southern city of Mykolaiv on Saturday for the first time since the Russian invasion in a rare trip outside Kyiv.

His visit comes a day after a Russian strike killed two people and injured 20 in the city.

Zelensky also took part in a meeting with local officials in what looked like an underground basement, giving out awards for bravery.

Meanwhile, a US plan to sell four large, armable drones to Ukraine has been paused for fear its sophisticated surveillance equipment might fall into enemy hands, two sources told Reuters.

All 27 leaders must back Ukraine’s candidacy at a Brussels summit next week but the heads of the bloc’s biggest members - France, Germany and Italy - gave full-throated support to the idea during a highly symbolic visit to Kyiv this week.
Hindustan Times