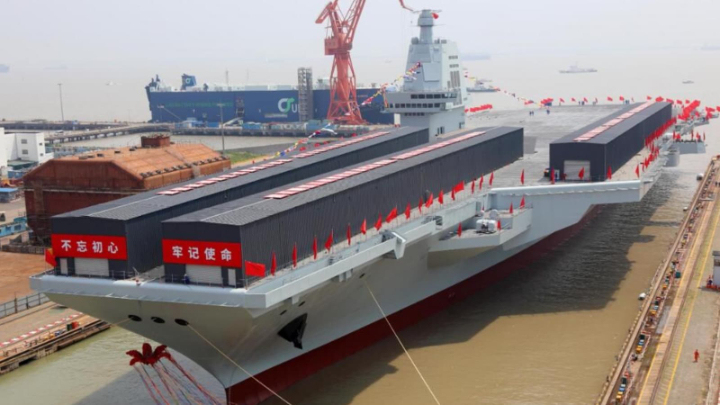 On June 25, India’s sole aircraft carrier INS Vikramaditya came out of a 18 month major refit at INS Karwar and proceeded to the port anchorage after firing its steam turbine engines. The aircraft carrier is expected to sail into high seas for a series of tests and trials before MiG-29K fighters are landed onboard the floating airfield. India’s second aircraft carrier named INS Vikrant will be commissioned by Prime Minister Narendra Modi at Cochin harbour on August 15, 2022—the 75th Independence Day.

The INS Vikramaditya came out of refit days after Chinese third aircraft carrier Fujian was launched from Jiangnan shipyard and is in the process of being fitted out. The steam powered 80,000-ton aircraft carrier is said to rival the 100,000 ton nuclear powered USS Gerald R Ford super aircraft carrier, which was commissioned in 2017.

While Fujian is touted to take on the US military power in the coming decade in the Indo-Pacific, serving Indian Navy Admirals are posing some fundamental questions on the operability of the Chinese carrier, which is said to be equipped with state of the art electromagnetic aircraft launch system (EMALS) and Advanced Arresting Gear (AAG) technology. As of now, only USS Gerald Ford is equipped with this advanced technology, which allows for faster take-offs and landings of fighter aircraft onboard the carrier.

The Indian Navy war planners are surprised and want to know how China will operate EMALS on steam power, when the technologically far superior US is still struggling with the same system onboard USS Gerald Ford. The US Department of Defence (DOD) reports indicate that the new technology system is performing sub-power with frequent breakdowns and is unreliable. One must remember that the USS Gerald Ford is a nuclear-powered vessel while the Fujian, like INS Vikramaditya, is a steam-powered warship and has more energy reserve at its command.

The challenge for Super carrier Gerald Ford is scaling a relatively new technology to handle the required weights and power.
EMALS motor generator, which is part of a suite of equipment called the Energy Storage Subsystem, weighs over 80,000 pounds alone.
The Energy Storage Subsystem also includes the generator control tower and the stored energy exciter power supply. The Gerald R. Ford Class carriers requires 12 such suites.
On power front, EMALS is designed to deliver up to 60 megajoules of electricity, and 60 megawatts at its peak in the 3 seconds it takes to launch a Navy aircraft. This amount of power could handle about 12,000 homes.
While launching F/A-18 aircraft loaded with fuel tanks, vibrations were detected when fuel tanks were attached to Super Hornets. Changes had to be made to the software and the system was adjusted to remove the vibrations.
Although China’s client states like Pakistan are thumping their chests with the PLA Navy now having three aircraft carriers on the sea at various stages of development, the US Navy, despite 100 years of experience in carrier operations, is still struggling with the new technologies on board USS Gerald Ford. India has been operating aircraft carriers since 1961 but China commissioned its first aircraft carrier only in 2012. Unlike fighters taking off from airbases on land, Naval Aviation is a supreme war fighting skill with pilots getting disoriented in blue skies above and endless blue waters on high seas. Landing a fighter on a carrier in turbulent conditions requires the highest level of skill and maneuvering.

With Indo-Pacific turning out to be the new theatre of confrontation between a rapidly rising China and the US, aircraft carriers like Fujian will be put to severe test by the American Navy with Japanese Navy now building up to meet the sea challenge. In this context, the Indian Navy will also have to play its part in the Indian Ocean and the Pacific as it is only a matter of time when the Chinese carrier task forces enter the Indian Ocean as part of their sea deterrence deployments. But the Chinese PLAN power projection with the Fujian and its actual capability on turbulent seas in war conditions is being watched by the QUAD navies.
Hindustan Times