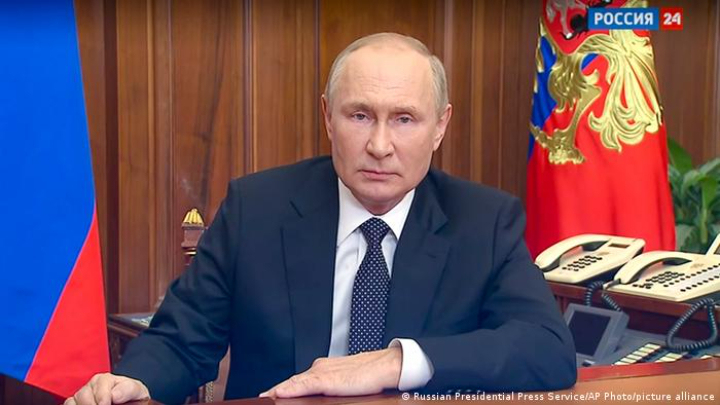 President Putin has ordered a partial mobilization of Russia's armed forces set to begin later on Wednesday. Meanwhile, Ukraine's Zelenskyy is scheduled to appear before the UN General Assembly. DW has the latest.

Putin said in a televised address on Wednesday that his aim was to "liberate" Ukraine's Donbas region and that he was defending Russian territories, adding that people in the region did not want to return to what he called the "yoke" of Ukraine.

The Russian leader stressed he was "talking about partial mobilization, that is, only citizens who are currently in the reserve will be subject to conscription, and above all, those who served in the armed forces have a certain military specialty and relevant experience."

The "referendums", to be held between September 23 and 27, in Luhansk, Donetsk, Kherson and Zaporizhzhia provinces, represent around 15% of Ukrainian territory, or an area about the size of Hungary.

"When the territorial integrity of our country is threatened, we will certainly use all the means at our disposal to protect Russia and our people. This is not a bluff," Putin said.

The West aims to "weaken, divide and ultimately destroy our country," Putin added.

Putin's speech was "another bad and wrong step from Russia, which of course we will discuss and consult on politically regarding how to respond," Habeck said.

Gillian Keegan, a minister at the British Foreign Office, told Sky News that Putin's speech was a worrying escalation and that the threats he made should be taken seriously.

"The overall address clearly was more of Putin's lies, it was a rewriting of history," Keegan told the TV channel.

The US Ambassador to Ukraine, Bridget Brink, tweeted that "sham referenda and mobilization are signs of weakness, of Russian failure"

She added the US would never recognize Russia's claim "to purportedly annexed Ukrainian territory" and the US continues to "stand with Ukraine for as long as it takes."

Zelenskky to appear at UN Assembly

Ukraine President Volodymyr Zelenskky is set to appear before the ongoing United Nations General Assembly in New York from Ukraine on Wednesday.

The 193-member assembly voted last week and made a special exemption for Zelenskyy to pre-record his speech because of the "ongoing foreign invasion'' and military hostilities that require him to carry out his "national defense and security duties.''

The war in Ukraine has dominated the annual gathering, with the first day witnessing several world leaders denounce Russia for invading a sovereign nation.

Russian President Vladimir Putin will not attend the global meeting.

Meanwhile, Ukrainian forces said on Tuesday that they were continuing to make gains in the direction of Luhansk.