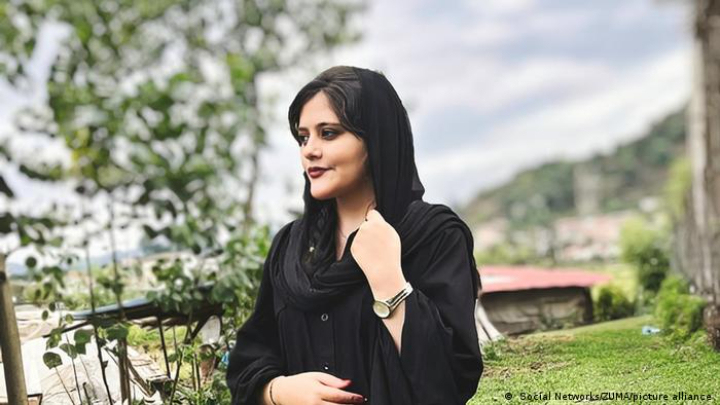 Mass protests have broken out across the Islamic nation amid public rage over the death of a young woman who had been arrested by the "morality police."

The recent death of a young woman who had been detained by Iran's "morality police" for violating the Islamic nation's conservative dress code has sparked mass protests across the country.

Mahsa Amini, 22, died last week after she was arrested for allegedly not complying with strict rules on head coverings for women.

Iran's President Ebrahim Raisi, who departed for New York on Monday to address the UN General Assembly, has ordered an investigation and vowed to pursue the case in a phone call with Amini's family. He also offered his condolences, the state-run IRNA news agency reported. "Your daughter was like my daughter," the president reportedly said.

The incident has caused outrage and grief in Iran and across the globe.

Mass protests flared up in Amini's home province of Kurdistan and other parts of the country. In the capital, Tehran, thousands of people took to the streets to express their anger and grief, chanting slogans such as "Death to the dictator."

Media outlets worldwide have reported extensively about it.

When Iran's president meets with journalists on the sidelines of the UN General Assembly, as planned, the death of Mahsa Amini will dominate the press conference.

The Iranian government has come under increasing pressure to carry out a proper and transparent investigation and bring the culprits to justice.

A spokesperson for EU foreign policy chief Josep Borrell called for those responsible for Amini's death to be held accountable and for the fundamental rights of all people in Iran to be protected — including those of prisoners.

Human Rights Watch demanded the abolition of the morality police and religiously based laws such as those on the proper wearing of headscarves.

The 22-year old from the small town of Saghes in the western province of Kurdistan had been on a visit to Tehran with her brother last week.

She was arrested by the authorities last Tuesday, for allegedly not covering her hair with the Islamic headscarf, known as hijab, which is mandatory for Iranian women.

Just a couple of hours after her arrest, she was hospitalized.

Police said on Thursday that Amini was taken to a hospital after she allegedly had a heart attack while in custody.

They have denied the allegations that she was physically abused after her arrest, saying "there was no physical encounter" between officers and Amini.

On closed-circuit footage — also released by police — Amini can be seen falling over after getting up from her seat to speak to an official at a police station. She is then shown being carried away on a stretcher.

Her family says she had no history of heart trouble.

A photo that went viral on the internet shows the bedridden Amini with swollen black eyes and bleeding ears. Many Iranian women, both young and old, could relate to it as they face daily humiliation and abuse in the hands of authorities because of the mandatory hijab.

Amini was officially declared dead on Friday, three days after she was admitted to the hospital. The Kasra Hospital, where Amini was admitted, said in a statement on Instagram on Saturday that the patient had  been brain-dead on arrival. The statement was later deleted.

The hijab has been compulsory for women in Iran since the 1979 Islamic Revolution, and the morality police are charged with enforcing that and other restrictions. The force has been criticized in recent years, especially for its treatment of young women.

Millions of Iranian women oppose the rules. In recent years the protests have become increasingly louder and more visible.

Many women wear their headscarves loosely and let them fall onto their shoulders, accepting the risk of being arrested.

The government under Raisi and religious hard-liners in parliament have been trying for months to enforce Islamic laws more strictly.

Numerous videos are currently circulating on the internet, showing women being beaten and abused by the authorities during arrests. The videos often show violent blows to the head as the women are dragged into the police car by their hair. 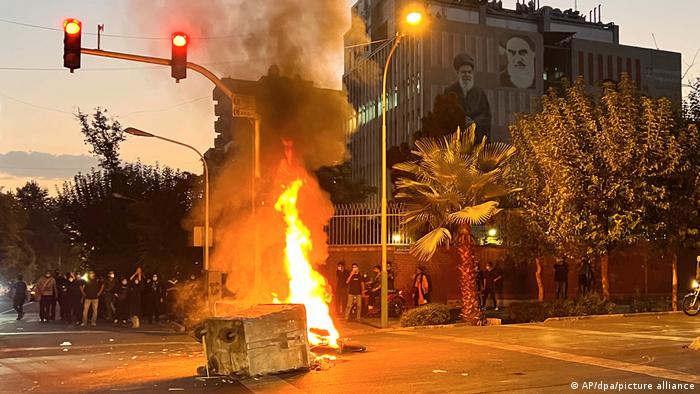 State media reported that authorities had opened an investigation to determine the cause of the death. The judiciary has launched a probe, and a parliamentary committee is also looking into the incident.

But many Iranians doubt that the probe will be carried out in an objective and transparent manner.

Amini's body, which was transported to her hometown of Saghes without an autopsy, was buried on Saturday morning.

Protests over the death began on the same day in her home province.

At the funeral, thousands demonstrated in front of the governor's office. According to the Fars news agency, clashes with security forces also occurred. Police used tear gas to disperse the crowds.

Security forces intervened during demonstrations in Sanandash, the capital of the Kurdistan province, on Sunday evening. Warning shots were fired, and several people were injured, reports from the province stated. A Kurdish human rights organization reported four deaths during the demonstrations.

In solidarity, businesses in Kurdistan announced that they would close their stores on Monday.

On Tuesday, the UN also decried Amini's death and called for the repeal of all discriminatory laws and regulations that impose mandatory hijab.

"Acting UN High Commissioner for Human Rights Nada Al-Nashif today expressed alarm at the death in custody of Mahsa Amini ... and the violent response by security forces to ensuing protests," the rights office said in a statement.

"The authorities must stop targeting, harassing and detaining women who do not abide by the hijab rules."