Sheikh Hasina noted that women are shining in each and every sector, breaking all the stereotyping and showing indomitable courage and leadership skills 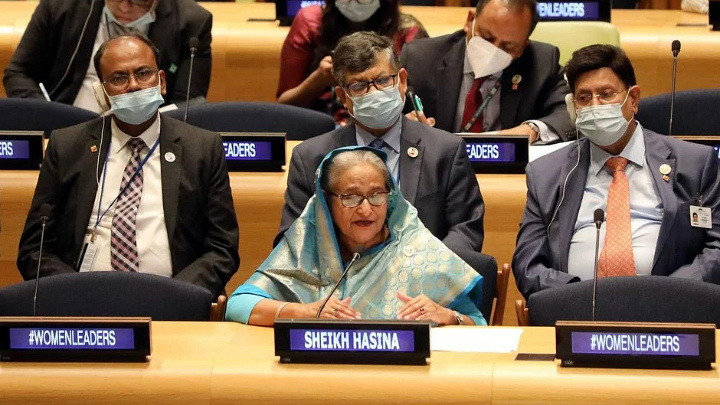 Prime minister Sheikh Hasina on Tuesday laid emphasis on the integration of women in decision-making process. She said that it is important to have them in leadership team to reflect on the solutions and benefit from their experiences and perspective.

“Women are disproportionately affected during crises. It is, therefore, important to integrate women in decision-making for finding an effective solution to the crises,” she said.

Sheikh Hasina noted that women are shining in each and every sector, breaking all the stereotyping and showing indomitable courage and leadership skills.

The prime minister made the remarks while addressing a ‘High Level Meeting of the UNGA Platform of Women Leaders Convened by the President of the General Assembly Csaba Korösi’ at Trusteeship Council in the United Nations Headquarters.

The theme of this year’s conference is “Transformative Solutions by Women Leaders to Today’s Interlinked Challenges”.

Sheikh Hasina strongly felt that it was high time for leaders to utilise the network (UNGA Platform of Women Leaders) to share views on tackling complex global challenges and bring positive outcomes not only for their respective countries but also for mankind.

“Women are disproportionately affected during crises. It is, therefore, important to integrate women in decision-making for finding an effective solution to the crises”

From the point of view of her country, the Bangladesh prime minister said, they look forward to continue participating in the UN’s efforts to encourage women leadership globally.

She highlighted three points on localising the advisory board on gender equality, nurturing and supporting the women-led civil society organisations with sufficient political and financial means and convening a Leaders’ Summit to reinforce common agenda for gender equality.

In her first point, Sheikh Hasina recommend for founding the advisory board on gender equality. “This now needs to be localised. We need gender champions at all levels, especially at the grass-root level, and we can lead by example.”

Besides, women-led civil society organisations need to be nurtured and supported with sufficient political and financial means, she said in her second point, adding that UN has an important role in supporting such efforts.

Finally, she invited all to convene a Leaders’ Summit to reinforce their common agenda for gender equality. “All leaders – not just us - should join and present concrete commitments for advancing gender equality and women empowerment.”

Talking about Bangladesh, Sheikh Hasina said the government has taken various steps to empower women and girls, to secure their legal protections and creating new ways for them to attain financial freedom.

To this end, she said that Bangladesh substantially achieved Goal three of the Millennium Development Goals (MDGs) by ensuring gender parity in primary and secondary education.

“We are committed to achieving the Sustainable Development Goal of gender equality and empowering women,” she added.

She also mentioned that about 27 per cent of the national budget is allocated for women’s social and economic empowerment activities.

In the political spectrum, the prime minister said, Bangladesh has ensured representation of women in all levels, from the top to the lowest tier of government. “We are bringing our women in the forefront of all economic activities.”

Encouraging women entrepreneurship is a key policy goal of her government, she said, adding: “We’ve taken specific policy actions, such as, fostering a gender-neutral legal framework for business ensuring equal access to finance for female and male entrepreneurs.”

She said Bangladesh central bank is providing collateral-free loan up to Tk 2.5 million to the women entrepreneurs.

The head of government also mentioned that 15 per cent funds of the refinancing scheme, 10 per cent industrial plots and 10 per cent small entrepreneur funds are allocated for women.

“Every bank and non-bank financial institutions have dedicated desk for women entrepreneurs,” she added.

She also said that over four million women are employed in the apparel industry, while some 35 per cent of the country’s women have their own bank accounts and women’s contribution to the GDP growth is 34 per cent.

Prime minister Sheikh Hasina has said her government is going to introduce a fresh national curriculum from next year aimed at raising Bangladeshi children as the global citizens to make them befit for the 4th Industrial Revolution (4RI).

“We look forward to raising our children as truly global citizens. We are introducing a new national curriculum from next year,” she said.

In a video recording national statement broadcast at the UN Secretary General’s Transforming Education Summit on Monday (New York time), the prime minister said, “The new curriculum will prepare our students for the Fourth Industrial Revolution.”

She added that it will make them aware of becoming climate resilient and turn them into the real agents of her nation’s ‘Vision - 2041’ to become a developed , knowledge-based economy.

In higher education, the prime minister said, “We are giving priority to research and development. For technical education, we aim to have better industry linkages.”

She said that the children should possess skills that they can use anywhere in the world.

“We need international cooperation for mutual recognition of qualifications .We commit to improve access to foundational and lifelong learning,” she said.

To promote multi-lingual education, the prime minister said, they have developed text books in the mother tongues of some of the ethnic groups.

“We are offering education in Myanmar curriculum to millions of children forcibly displaced from Rakhine State and sheltered in our land,” she mentioned.

For quality and inclusive education, she said, her government has to invest in regular training and incentives for their teachers.

“We commit to increasing budget allocation for education in proportion to our GDP,” she said.

The prime minister further said the development partners of Bangladesh need to live up to their fiscal commitments for SDG - 4. The resources spent on global arms race should be channelled to a sound partnership for education, she added.

“-- we shall continue to monitor SDG - 4 indicators on local to national level. Education is the backbone of a nation. We must take equity- and rights-based approach proportion to our GDP,” she said.

The prime minister thanked the UN Secretary General for organising the Transforming Education Summit, saying that this summit marks a new way of thinking about education with future changes in the world of work.

“The Covid -19 pandemic caused learning losses all over. In Bangladesh, we have enrolled 600,000 out-of-school students into non-formal education since December 2021,” she said.

The prime minister said they have started vaccinating children above 5 years of age.

“Nearly 23 million students from primary level to high education get stipends and scholarships,” she added.

She said they will continue to provide cash incentives through mobile gateways to hard-pressed families.

“Our successful programmes involving stipends , midday meal and free textbook distribution will be carried on,” she said.

The pandemic also opened up scope for innovations in distance learning, she said, adding that in Bangladesh, they have developed a Blended Education Master Plan.

“We shall set up nearly 59,780 multi-media classrooms by next year. We shall put focus on reducing digital divide among our students,” she added.

The prime minister said Bangladesh has made significant gains in achieving gender parity in primary and secondary schools.

“We shall continue to work on reducing gender gaps in higher and technical education. Educating our girls has always been one of my key priorities,” she added.