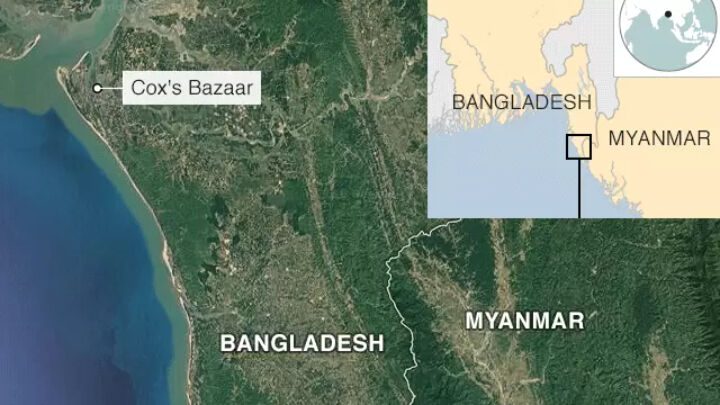 Rohingya refugees living in the no-man's land near Tambru of Bandarban's Naikhyanchhari upazila formed a human chain and wrote to the United Nations (UN) to take measures for their protection and safe return to Myanmar's Rakhine State.

In the wake of the recent shellings at the Bangladesh-Myanmar border, Dil Mohammad, chairman of the management committee of the Rohingya camp located there, appealed in an open letter on Monday on behalf of around 4,500 Rohingyas.

They also formed a human chain protesting the demise of a young boy who died after being hit by a shell hurled by the Myanmar army from the other side of the border.

The Business Standard (TBS) has obtained a copy of the letter.

In the letter, the Rohingya leader wrote that since 2017 "We [Rohingyas] have been taking refugees at no-man's land on the Bangladesh-Myanmar border to escape Myanmar army's mass atrocities".

But on 16 September this year, the Myanmar army randomly fired mortar shells "intentionally" on the Rohingya displaced camp between the borders, resulting in a boy being killed and five others critically injured, the letter added.

Rohingyas were feeling unsafe due to "heavy weapons shelling" from the Taung Pyo camp of the Myanmar army situated close to the Rohingya camp between the borders, it added.

Speaking with TBS, Dil Mohammad said, "We have informed the UN that the Myanmar junta can unleash a big attack on us at any moment.

"We urge them [the UN] to take all necessary measures to ensure the safety and security of our."

The Myanmar military has been carrying out air and ground assaults against the Arakan Army, an ethnic armed organisation based in Rakhine State, for the past few weeks,

Residents of the upazila have heard gunshots and heavy blasts on the Myanmar side of the border since last Friday.